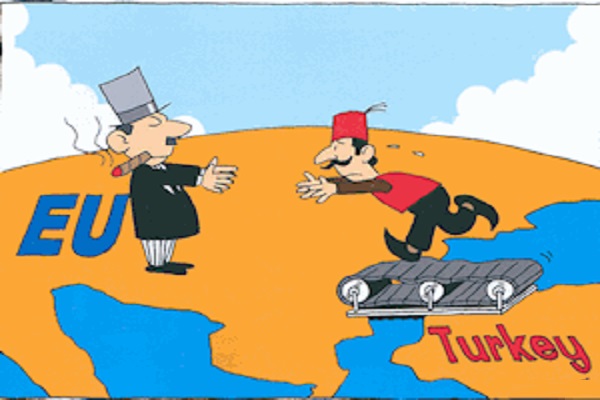 Euroskepticism has been growing among Turks in recent years. As a result, the EU has become the target of harsh critiques instead of target for accession. To what extent Turks’ increasing anti-EU attitudes are likely to influence Turkish foreign policy in the years to come? On the one hand, have the disillusionment with the EU pushed Turkey to search for alternatives in Eurasia and the greater Middle East? On the other hand, has the Turkish government decided to put forward its Eurasian options as a bargaining leverage against lagging EU-accession negotiations? All in all, does the fact that Turkey has been experiencing problems with the EU offer viable Eurasian alternatives for the future of Turkish foreign policy? What are the likely policy implications of such alternatives for Turkey’s relations with its partners in Europe, the United States, and the greater Middle East? Addressing these questions requires multifaceted analysis of the relationship between growing public Euroskepticism among Turks and its policy implications for Turkey at domestic and international levels.

Dr. Giray Sadık earned his Ph.D. (2008) in Political Science from the University of Georgia (Georgia, USA) specializing in International Relations and Comparative Politics. International security, American foreign policy and greater Middle East, Transatlantic relations and Turkish foreign policy are among his research interests. His book ‘American Image in Turkey: U.S. Foreign Policy Dimensions’ was published by Lexington Books (2009). Dr. Sadık thought courses on international relations, American foreign policy and international security in the United States. After his return from Sweden where he was a postdoctoral fellow in the Department of Global Political Studies at Malmö University; currently, he is a Faculty Member and Erasmus Coordinator in the Department of International Relations, Faculty of Political Science at Yıldırım Beyazıt University, Ankara, Turkey.

Mr. Kourtelis completed his undergraduate degree in European Studies in Greece at the Hellenic Open University. He then continued his studies at the LSE, where he obtained an MSc in development studies. His research interests include the external policies of the EU to the MENA countries, the aid policies of the EU member states, the history and politics of EU development assistance. Christos has worked for the European Commission and at the moment he is a teaching fellow of European and International Studies, King’s College London. He has taught several modules related to EU politics, international relations, Middle East politics and comparative politics at the University of Westminster and at Birkbeck College.

This event is free and open to public but it is a ticketed event that requires pre-registration. Ticket holders should arrive at least ten minutes before the start time as seats are released after this time. A ticket does not guarantee a seat. Please register and reserve a ticket at the link below or RSVP by sending an email to [email protected].