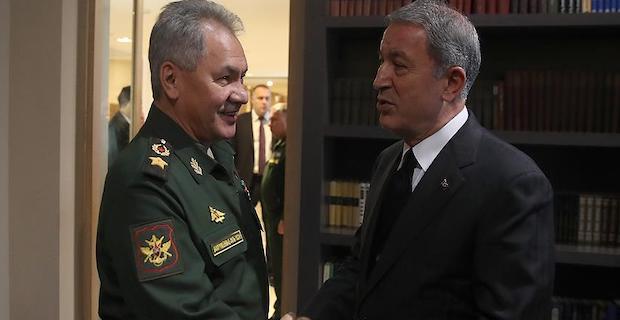 Russian defense minister will arrive in Turkey on Monday to discuss Syria with his Turkish counterpart, according to Turkish National Defense Ministry sources.

Russia’s Sergey Shoygu will pay a visit to the capital Ankara upon the invitation of Turkey’s Hulusi Akar, said the sources, speaking anonymously due to restrictions on speaking to the media.

The two ministers are expected to discuss latest developments in Syria, particularly in Idlib, before a planned summit on Syria between Turkey, Russia and Iran in the Russian resort city of Sochi on Thursday.

The following month saw all heavy weapons withdrawn from the de-escalation zone by Syrian opposition and anti-regime groups.

Nevertheless, according to the White Helmets, at least 30 people in Idlib were killed in January, including women and children, while another 180 were injured -- in Idlib, Hama and Latakia -- by regime drone attacks and artillery fire.

Keywords:
Discuss Syria In AnkaraTurkish National Defense MinistryRussian Defense Minister
Your comment has been forwarded to the administrator for approval.×
Warning! Will constitute a criminal offense, illegal, threatening, offensive, insulting and swearing, derogatory, defamatory, vulgar, pornographic, indecent, personality rights, damaging or similar nature in the nature of all kinds of financial content, legal, criminal and administrative responsibility for the content of the sender member / members are belong.
Related News