Foreign Minister Mevlut Cavusoglu and his American counterpart Mike Pompeo have agreed to meet in Washington, according to Foreign Ministry spokesman Thursday. 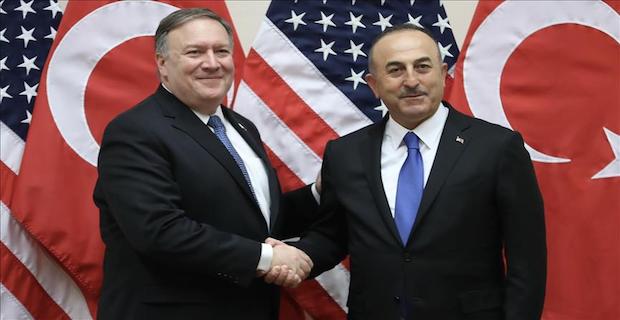 AVRUPALONDON - Foreign Minister Mevlut Cavusoglu and his American counterpart Mike Pompeo have agreed to meet in Washington, according to Foreign Ministry spokesman Thursday.Speaking at a news conference in capital Ankara, spokesman Hami Aksoy said the date of the visit remains undecided.On April 27, Cavusoglu and Pompeo held a bilateral meeting during the NATO foreign ministers summit in Brussels. "Here, they discussed the implementation of the pre-agreement on Manbij, Turkey's purchase of S-400 missiles from Russia and the issue of American Pastor Andrew Craig Brunson," Aksoy said.

Regarding to working groups Turkey and U.S. established before, Aksoy said: "As you know, one of the working groups on consulate matters have already met. We are trying to determine a date for the other working group's meeting, it may also meet soon."

Turkey and the U.S. have established working groups to discuss the stabilization of Manbij, Syria and to prevent any undesirable clashes.

Both nations have been trying to iron out a number of issues, principally the issue of terrorist YPG/PKK group in Syria which the U.S. supports as a "reliable ally" in the fight against Daesh.

Keywords:
Mevlut CavusogluTurkish Foreign MinisterWashingtonMike PompeoAmerican Counterpart
Your comment has been forwarded to the administrator for approval.×
Warning! Will constitute a criminal offense, illegal, threatening, offensive, insulting and swearing, derogatory, defamatory, vulgar, pornographic, indecent, personality rights, damaging or similar nature in the nature of all kinds of financial content, legal, criminal and administrative responsibility for the content of the sender member / members are belong.
Related News