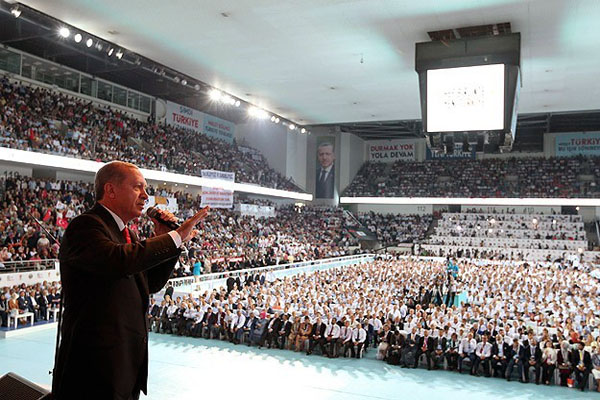 'I extend my hand again on behalf of my party, government and the movement that I am the leader of,' says Erdogan "We understand you, your historical background, lifestyle, values, demands and desires very well," he said adding "I extend my hand again on behalf of my party, my government and the movement I am the leader of," he said. Erdogan in his address to the nation explained that he wanted the public to understand the trials and hardships the party has gone through to reach this point in history:   "We want you to understand what prohibitions, restrictions and threats we have surmounted to come to this day. We want you to see and understand what kind of insults, exclusions and tyrannies we were exposed to." Erdogan reiterated that Davutoglu - the incoming prime minister - will not be a pawn as many newspapers write. "The presidency, our new government and political institution will continue a determined and courageous struggle against treachery in a parallel state and bureaucratic tutelage at the same time," Erdogan said, and added that a parallel state nestled within a state, gangs and mafia-like organizations will never be tolerated in the 'new Turkey.'

Erdogan vowed to work with the new government in harmony and cooperation as they have when they worked with the outgoing President Abdullah Gul. He stressed that he would remain in close contact with his party within the restraints of the law and the constitution.

Foreign Minister Ahmet Davutoglu is expected to be elected chairman of the ruling Justice and Development (AK) Party at its ongoing extraordinary congress Wednesday in Ankara. He is expected to be designated as the prime minister on August 28, after the president-elect Erdogan is sworn in on the same day.

He claims the Gulen movement, allegedly led by U.S.-based preacher Fethullah Gulen, had infiltrated the Turkish state and attempted to overthrow the government.

Erdogan is to officially step down as prime minister on Thursday in favor Ahmet Davutoglu and will then be sworn in as Turkey's 12th president.

Emphasizing the continuity of the change at the top of government, he said: "What is happening today is not a mission change but merely a name change. This absolutely is not a parting. You should know this is an opening, a beginning, an inauguration and a milestone. I want you to understand it like that.

"Following the presidential swearing in ceremony, God willing, he, Ahmet Davutoglu, will be given the task of forming a cabinet. And God willing, the new cabinet will be in place on Friday."

The final stages of Erdogan's term as head of Turkey's ruling AK Party ends when Foreign Minister Davutoglu replaces him as party chairman.

Davutoglu, a multilingual former academic and foreign policy expert, will become prime minister after Erdogan is sworn in.

The extraordinary congress in Ankara Arena follows Erdogan’s presidential election victory on August 10. Under Turkish law, the president cannot be connected to a political party.

The victory consolidated his hold on power after an 11-year tenure as prime minister. He is widely expected to bolster the powers of the five-year presidency, turning it from a largely ceremonial role to a more hands-on position.