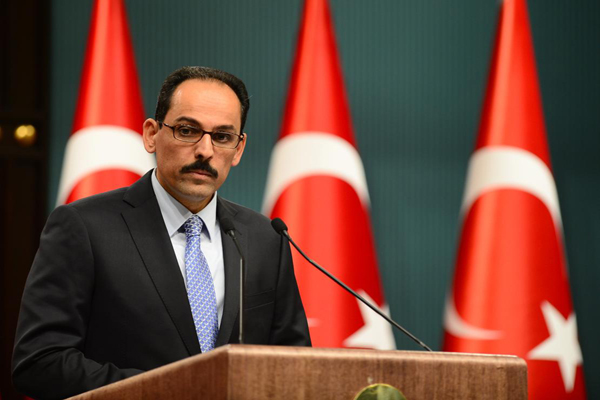 Russian President Vladimir Putin said early Friday that he and Turkish President Recep Tayyip Erdogan have agreed to work on launching a new series of peace talks between the Syrian regime and opposition.

welcomed Putin's proposal and agreed to work on it.

Kalin described Putin's offer as starting a second process in addition to Geneva talks which would bring regime and opposition representatives together, under UN roof.

"It is important that this offer comes from Russia," he added.

Kalin said, "this is not an alternative to the Geneva talks, but perhaps a process can be initiated in coordination with Geneva talks."

This may positively influence the dynamics, he added.

"We will work on this, but it is more urgent to stop the conflicts in Aleppo," he stressed. Kalin said it is not meaningful to carry on negotiations in Astana, Geneva or elsewhere while the conflict still continues there.

Putin told a press conference in Tokyo, "the day before yesterday in a phone conversation we

agreed with President Erdogan that we will offer the conflicting parties -- we to the government of Syria and the Turkish president to the representatives of the armed opposition -- to continue peace talks at a new venue, and this could be Kazakhstan’s capital Astana," as Russian news agency TASS quoted.

Putin added that if the regime and opposition agree to the proposal, "we will ask Kazakh President Nursultan Nazarbayev to back this process." He also insisted that the proposed talks in Astana would not “compete” with those held in Geneva, but would “complement the Geneva talks".

Since then, at least 7,500 civilians have left Aleppo for safe areas in Idlib -- which is located near the border with Turkey -- according to Syrian opposition group officials.

Syria has been locked in a vicious civil war since early 2011, when the Bashar al-Assad regime cracked down on pro-democracy protests -- which erupted as part of the "Arab Spring" uprisings -- with unexpected ferocity.

Since then, more than a quarter of a million people have been killed and more than 10 million displaced across the war-battered country, according to the UN. The Syrian Center for Policy Research, however, put the death toll from the six-year conflict at more than 470,000 people.