Territorial integrity, domestic peace in Syria, and the rights of Syrian people to be able to choose their leader are the same targets that Turkey and Iran 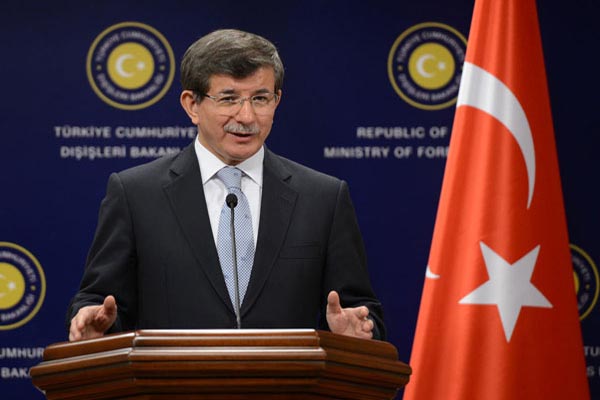 Turkey and Iran agree on the humanitarian dimension of the Syrian conflict as there can be no differences of opinions in the humanitarian tragedy, said Turkish Foreign Minister Ahmet Davutoglu following his meeting with his Iranian counterpart Mohammad Javad Zarif in Ankara on Friday.  Davutoglu said Iran and Turkey disagree on certain issues but stability, territorial integrity, domestic peace in Syria, and the rights of Syrian people to be able to choose their leader are the same targets that Turkey and Iran have.

"We should work to end the humanitarian tragedy in Syria. People are hungry in the suburbs of Damascus and Aleppo," he said.

"This flame in Syria will negatively affect us in one way or another, and today is the day to extinguish those flames to come up with a transition period which will meet the rightful demands of the Syrian people," Davutoglu said.

"Iran is ready to attend the Geneva-2 conference with no preconditions and strive to reach a peaceful agreement if it is invited," said Zarif when asked whether it would attend the planned international peace conference set for November 23.

Zarif stressed that Iran as an effective country in the region should be invited to the conference.

"Iran is against the bloodshed in Syria. We want to resolve the conflict through dialogue and ballot boxes should be the solution for the Syrian people in determining their own future," Zarif said.

More than 100,000 people have been killed in more than two years of conflict in Syria and over two million Syrians are now registered as refugees in neighboring countries, according to the UN.

When asked whether the sanctions imposed on Iran due to its "nuclear ambitions" were negatively affecting its commercial relations with Turkey Zarif said, "It is concerning both Turkey and Iran has always had a clear attitude with this issue and conducted good commercial relations on the international platform. Both countries have done their utmost. Our relations should never be affected by the third parties."