Trumps top lawyer declared he would recuse himself from Russia probe

Sessions adamant congressional testimony was 'honest and correct' at the time 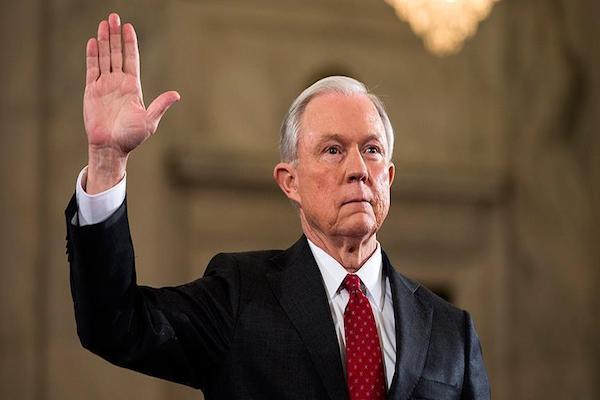 Sessions told a press conference he would follow the advice given to him by his staff and recuse himself from any investigation of Russia's interference in the 2016 presidential election.

"I believe those recommendations are right and just," he said at the Justice Department.

Still, he maintained his decision was not confirmation of the existence of any ongoing investigation, or its scope.

Sessions faced a plethora of calls for his recusal after the Washington Post reported he met twice with Russia’s Washington envoy during the run-up to last year’s presidential election -- contacts he denied under congressional testimony.

During his Jan. 10 confirmation hearing before the committee, Sessions was asked what he would do if there were evidence Trump campaign officials communicated with the Russian government during the campaign.

“I'm not aware of any of those activities,” he replied to Sen. Al Franken. “I have been called a surrogate [for the Trump campaign] at a time or two in that campaign and I did not have communications with the Russians.”

Sessions was adamant his answer was "honest and correct" as he understood it "at the time".

"In retrospect, I should have slowed down and said, 'But I did meet one Russian official a couple of times, and that would be the ambassador,'" he added.

In the run-up to his announcement, senior lawmakers called for Sessions to recuse himself from any investigation while others, mostly Democrats, said his testimony is grounds for dismissal or potential imprisonment.

Sessions said he would write to the Senate Judiciary Committee to explain his testimony for the record.

"He is clearly trying to maintain his ability to control the larger investigation into the sprawling personal, political and financial grip Russia has on the Trump Administration," she said in a statement calling for his resignation.