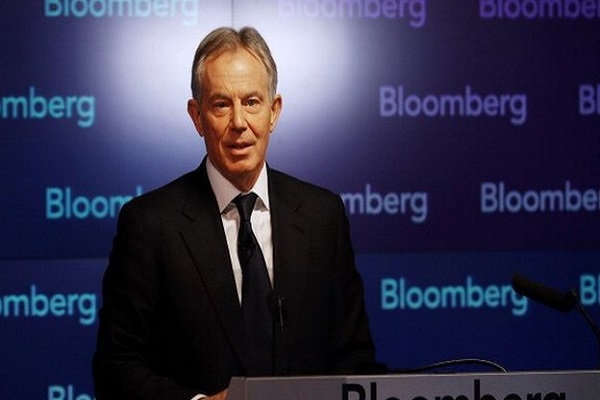 In a speech the former UK prime minister - now a Middle East envoy - said powerful nations must "take sides" and back "open-minded" groups.

Mr Blair told the BBC ahead of the speech the West would pay a "very heavy price" for not intervening in Syria.

He said the opportunity to create "an optimistic solution" had been missed.

Mr Blair gave his speech at Bloomberg in London amid high tensions between Russia and the West over Ukraine.

No-fly zones
Before the speech, the former PM - now envoy for the quartet of the UN, EU, US and Russia - spoke to the BBC's security correspondent Frank Gardner.
He argued the West had a "responsibility but also an interest" in making sure that "huge struggle" was "resolved in the right way".
"However much people may think we can just push it to one side and forget about it, I think that would be a mistake.
"Above all, we have to commit. We have to engage."
On the issue of Syria, Mr Blair said he understood the UK's reluctance not to take military action, but he would have pushed for the imposition of no-fly zones had he still been in office two years ago.
"I know what the difficult consequences are of intervention, but if you look at Syria you see the consequences of non-intervention, and non-intervention there is something for which we will pay a very heavy price."
Your comment has been forwarded to the administrator for approval.×
Warning! Will constitute a criminal offense, illegal, threatening, offensive, insulting and swearing, derogatory, defamatory, vulgar, pornographic, indecent, personality rights, damaging or similar nature in the nature of all kinds of financial content, legal, criminal and administrative responsibility for the content of the sender member / members are belong.
Related News