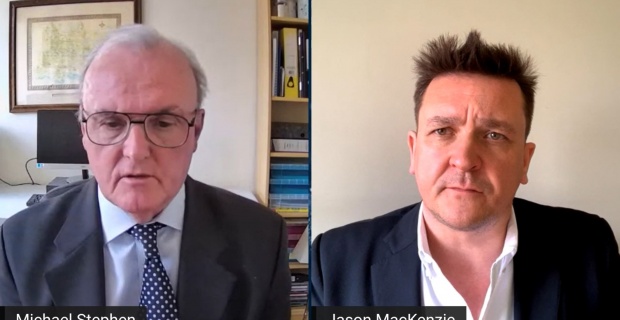 AVRUPA TIMES/LONDON-In a pre-recorded webinar, prepared ahead of the Geneva Cyprus talks and aired on TRNC terrestrial and digital TV (BRT2 and Kanal T) on Monday, 3 May, PR Consultant, political strategist and elections and campaigns director Jason MacKenzie spoke to the former Conservative MP, international law expert and legal advisor to Rauf Denktas, Michael Stephen about his long-standing interest in the Cyprus conflict. The event was organised by the British Turkish Cypriot Association (BTCA). Michael shared the story about how he first developed an interest in Cyprus during his time in Parliament. Tasked with providing a report on the island, he conducted his own research about the Turkish Cypriot community. Until then he had traditionally seen the Greek Cypriots as victims, but discovered that the Turkish Cypriots had been subjected to genocide from 1963 onwards, referring to the Bloody Christmas pogrom of that year. As a result of this he said, the Turkish Cypriots had withdrawn into defended enclaves and survived largely alone, with the exception of some support from Turkey.

When asked why he chose to start the webinar focusing on the year 1963, Michael discussed Cyprus’ history and how the situation had come to that point, starting with its time as an Ottoman territory from the sixteenth century, to its coming under British administration in 1878, and its independence from Britain as a shared republic in 1960.He added that from 1960 onwards, President Makarios and the Greek Cypriot leadership had a different vision, either Greek Cypriot dominance or union with Greece. He also said, that these sentiments continue to exist among Greek Cypriot leaders today, but explained that “until they get that idea out of their heads, there’s no way that there’s going to be a settlement in Cyprus that both the Turkish Cypriots and the Greek Cypriots can live with.”
Commenting further on the 1960 Republic and the mistreatment of Turkish Cypriots, he said that about a third of the population were Turkish Cypriot. The republic’s vice president was from the Turkish Cypriot community, which was protected by constitutional safeguards. He explained that Makarios however, tried to undermine these safeguards, and the Turkish Cypriots took him to the Constitutional Court who ruled against the Greek Cypriot leadership who in turn ignored the ruling. 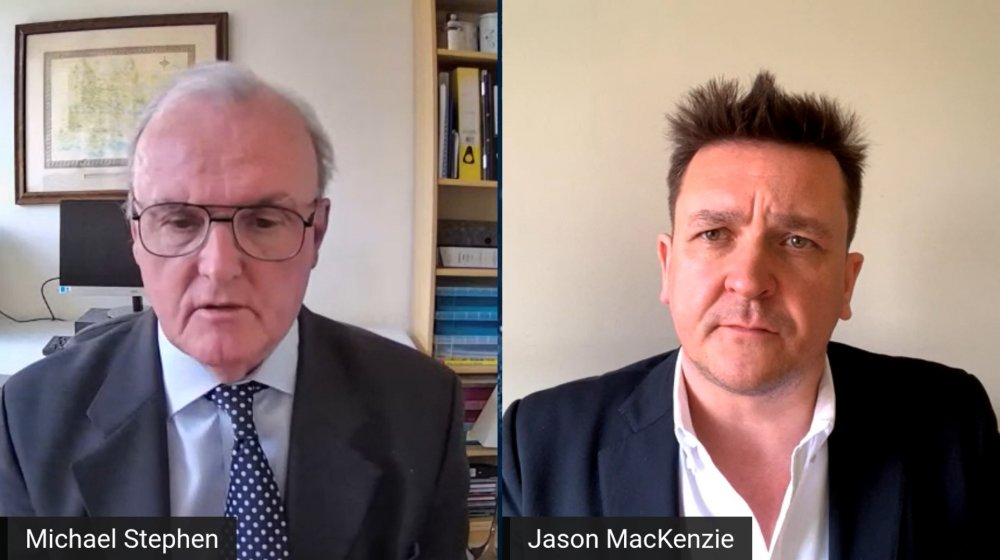 When asked about the role of international players, Michael shared his view that the international community did not respond to the Greek Cypriots’ crimes as they would later handle the war in Kosovo, with military intervention and diplomatic action, but instead, they rewarded the Greek Cypriots by recognising them as the sovereign government of the whole island.Jason and Michael also discussed the role of the United Nations and the European Union. Michael said that the UN and EU are both part of the problem, because they legitimised the Greek Cypriots and admitted them as members. He added that some lawyers have said that the EU acted unlawfully as Cyprus was not allowed to join the union without the consent of the three guarantors Greece, Turkey, and the UK. Turkey and the Turkish Cypriots did not give that consent, but Cyprus was still admitted as a single entity.

The Turkish Cypriots had wanted their constitutional safeguards and system put back in place before going into the EU. This was shown by their acceptance of the Annan plan by referendum Michael noted, which the Greek Cypriots on the other hand rejected. As a result, he explained, the EU cannot be an honest broker.

On the subject of recognising the Turkish Republic of Northern Cyprus, Michael said recognition is possible, however Britain refuses to do so because of the threat to their military bases, which the Americans also use. He added however, that a powerful country like China could do it. Michael also mentioned that Bangladesh had recognised the TRNC before, but was pressured into changing its position. However, if a number of Muslim-majority countries recognised the TRNC he noted, that could change the game. On this subject, he added that Turkey’s support for a two-state solution could be helpful, especially if Ankara uses its position as a major military and regional power to convince other Muslim-majority countries to adopt their view.

Commenting on the role of Britain, Michael explained that the UK has been trying to maintain the status quo, and as such has been making efforts to encourage the Turkish Cypriots away from a two-state solution model, and bring them towards another version of the Annan Plan. “The British Government doesn’t care about Turkish Cypriots, nor do the Americans” he explained, adding that “Cyprus to them is just a strategic asset.”Michael also said that there is no downside for Britain in the status quo at the moment. This is because the UK’s sovereign bases on the island have meant that London is prepared to ignore human rights violations and its own legal obligations, focusing instead on the strategic benefits.

When asked how he would advise British Foreign Secretary Dominic Raab on Cyprus, Michael replied, “British policy on Cyprus is being devised and maintained by the mandarins of the foreign office” adding that “they are in charge, not the politicians who come and go every five minutes.” He also said however, that if a Prime Minister decides on a new policy, that can bring change.
He also said, that Scotland could have been allowed to be an independent country if they had chosen to do so, and questioned why Britain does not afford the same right to the Turkish Cypriots.
When asked about the Turkish Cypriots’ position at the Geneva Conference, Michael argued that they have nothing to gain by going to Geneva, and that there is no one around the table there that Turkey and the Turkish Cypriots can trust.Bringing the discussion to a close, Michael concluded that a two-state solution is the best way to solve this issue. If two states cannot be achieved however, Michael argued that the next best thing for the TRNC would be to stay as they are, and allow Turkey to encourage other countries to recognize them.

Keywords:
TRNCTurkeyTurkish CypriotsGeneva Cyprus TalksCyprus Conflict
Your comment has been forwarded to the administrator for approval.×
Warning! Will constitute a criminal offense, illegal, threatening, offensive, insulting and swearing, derogatory, defamatory, vulgar, pornographic, indecent, personality rights, damaging or similar nature in the nature of all kinds of financial content, legal, criminal and administrative responsibility for the content of the sender member / members are belong.
Related News