Counting is under way in English local elections - the biggest test opinion before next year's general election. 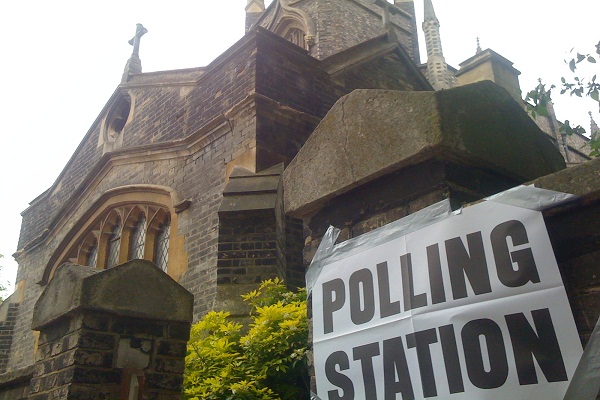 Counting is under way in English local elections - the biggest test opinion before next year's general election. The Lib Dems are braced for a "difficult night", while very early results suggest UKIP could be on course for another good set of results.

The results of the UK-wide European elections will not be known until late Sunday when counting takes place across the European Union.

Labour is neck-and-neck with UKIP to win the Euro election, polls suggest.

A poll by YouGov for Thursday's Sun newspaper predicted Nigel Farage's party would win with 27% of the vote, with the Lib Dems back in fifth place.

In addition to the UK-wide polls, there are elections to 161 councils in England and 11 in Northern Ireland.

The first results of the night are from Sunderland, as is often the case, and show UKIP could be on course to repeat the good performance it achieved at last year's local elections.

Nigel Farage's party was averaging 30% in some wards but failed to win a seat. Labour's vote was down 16% in some wards but the party gained a seat from the Tories and retained control of the council. The Lib Dem vote was down sharply. It is still very early days but Labour's Chuka Umunna has told the BBC the UK is now "undoubtedly in an era of four-party politics". Lib Dem Business Secretary Vince Cable has already taken to television studios to warn his party to prepare for difficult news. But speaking on Sky News he said supporters would be "pleasantly surprised" in areas where the party is well-organised.

Labour is treating the local elections as a dry-run for the 2015 general election, ruthlessly targeting battleground seats it needs to win at Westminster.

Ed Miliband's party is under pressure to show it can make gains outside of its northern heartlands - but it is probably in the best position to make gains in London. One Tory MP, Douglas Carswell, has called on his party to ender a pact with UKIP going into the general election. Writing in the Telegraph newspaper that it looks as if the "Tories may have finished third". Party chairman Grant Shapps rejected the idea, however, saying there was "no question of a pact per se".

In contrast to most of the rest of England, where a third of seats on local councils were up for grabs, every seat in all 32 London boroughs was being contested on Thursday, raising the prospect of a dramatic redrawing of the capital's political map.

If Labour has a good night, it will take control of Croydon, Barnet and Hammersmith and Fulham - all from the Conservatives.

The first London results are expected after 03:00 BST.

Election experts Professors Colin Rallings and Michael Thrasher believe Labour will gain between 490 and 500 council seats - but party sources were playing down expectations, suggesting 150 to 200 gains would represent a good night. The Conservatives were defending 1,574 seats and 53 councils in England they currently control, including Trafford, Solihull, Milton Keynes, Croydon and Barnet. Rallings and Thrasher believe David Cameron's party can expect to lose about 200 seats.

UKIP is expected to make gains in town halls across England. It is unlikely to take control of any local authorities outright but, if it has a good night, could become the official opposition in more areas.

Liberal Democrat MP Jeremy Browne - until late last year a Home Office minister - described UKIP's appeal as a "a big two fingers stuck up... to a hectoring out-of-touch elite". He told the BBC's Question Time some its supporters "may be sexist and racist" but that other parties should "spend a little bit of time" understanding why it was attracting protest votes.

Last year Nigel Farage's party won a lot of seats in Kent and Lancashire. It is hoping to repeat this performance in areas like Great Yarmouth, Basildon and Eastleigh, a Lib Dem stronghold it almost took at a Westminster by-election and which is expected to be among the first councils to declare at about 1:00 BST.

Counting is already under way in Sunderland where a result is expected at 01:00 BST

The Lib Dems are braced for further heavy losses in the local and European polls, with some senior party figures fearing it could lose all 12 of its MEPs.

But party insiders say they expect to buck the trend in areas where they have a strong local base. They are expected to lose at least 200 of their 732 local council seats being contested - and could lose control of Kingston and Sutton councils in South London, both home to Lib Dem MPs.

The Green Party overtook the Lib Dems in some opinion polls and is hoping to double its number of MEPs to four - it is also targeting areas where it has a strong activist base at the local elections such as Camden and Westminster.

In Northern Ireland, voters were electing 462 representatives to 11 so-called "super districts" following a reorganisation that took place in 2012, reducing the number of councils from 26 previously.

There were no local elections in either Scotland or Wales.

You can follow full coverage with all the latest updates at bbc.co.uk/vote2014