The student funding system was operated so that "lack of finance should not be a barrier to participation and more funding is available to support living costs than ever before". 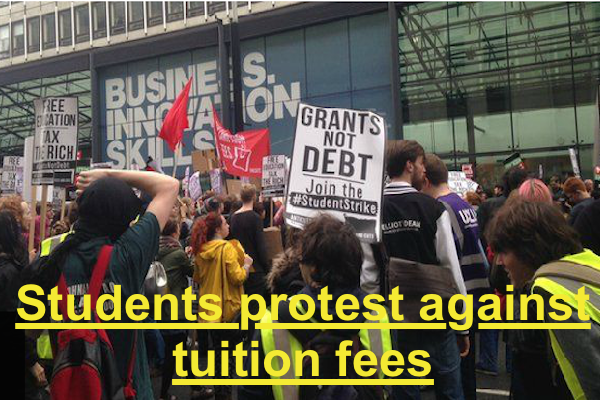 Avrupa Times/London-There were brief scuffles in London during a student protest march calling for the abolition of tuition fees and the retention of maintenance grants. The "grants not debt" march came to a stop outside the Department for Business Innovation and Skills. A small number of demonstrators dressed in black and with scarves over their faces confronted police and a firework was set off.

The protestors were calling for a "free education".

A statement from the Metropolitan Police said a "small number of smoke bombs and eggs were thrown at police outside BIS". They said there were 12 arrests for public order offences. Thousands of students had marched through central London, with chants and placards attacking the cost of going to university. Earlier Labour leader Jeremy Corbyn sent a message of support for the cause of abolishing tuition fees and shadow chancellor John McDonnell addressed the students before the rally. "Your generation has been betrayed by this government in increases to tuition fees, in scrapping the education maintenance allowance and cuts in education," Mr McDonnell said. "Education is a gift from one generation to another, it is not a commodity to be bought and sold," he told marchers.