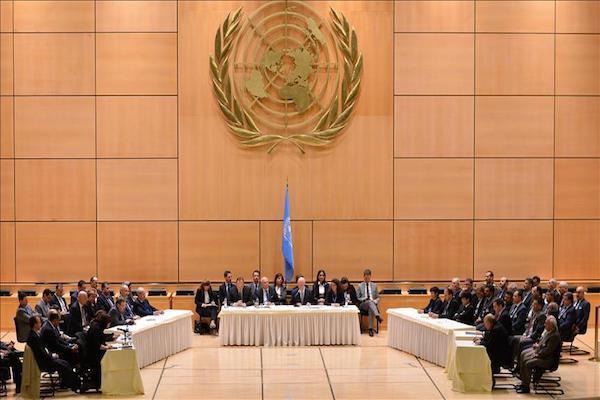 "The Syrian people desperately want an end to this conflict and you all know it. You are the first ones to tell us it," de Mistura told both delegations in the UN assembly hall in Geneva.

The talks are taking place with the participation of representatives from the International Syria Support Group, which includes Turkey, the U.S., Russia and Iran.

"They are waiting for a relief from their own suffering and dream of a new road out of this nightmare to a real and normal future in dignity," de Mistura added.

"l am not expecting miracles. We face an uphill task. It will not be easy as there is a lot of tension and there is a lot of suffering that everyone is bearing. We must apply to ourselves to this task," de Mistura said.

The fourth round of the intra-Syrian talks began in Geneva on Thursday, marking the first time the Syrian regime and opposition delegations have returned to the Swiss city since talks were suspended last April.

At those talks, de Mistura had to meet separately with the opposing delegations.

"We want direct talks, direct negotiation. It is enough for Syrian people. l hope to see serious partners," High Negotiations Committee (HNC) spokesman Salem al-Muslat told reporters in Geneva on the eve of talks with the Syrian regime and opposition.

Criticizing the regime’s delegation, Muslat said: "They are not here really to negotiate about political transition but they are here just to buy time and commit more crimes in Syria. There is no trust in this regime."

He also said “Iran is an occupying state in Syria” and “could not be a guarantor state”.

The UN envoy said on Wednesday he did not expect a breakthrough at the talks this week and he would refuse any preconditions ahead of the negotiations that would focus on new elections, a new constitution and governance in Syria.

De Mistura also said Russia asked the Syrian government to halt its bombings during the talks.

"Today, the Russian Federation did announce they have formally requested the government of Syria to silence their skies during the intra-Syria talks," de Mistura said.

Since then, more than a quarter of a million people have been killed and upwards of 10 million displaced across the war-torn country, according to the UN. The Syrian Center for Policy Research puts the death toll at more than 470,000.