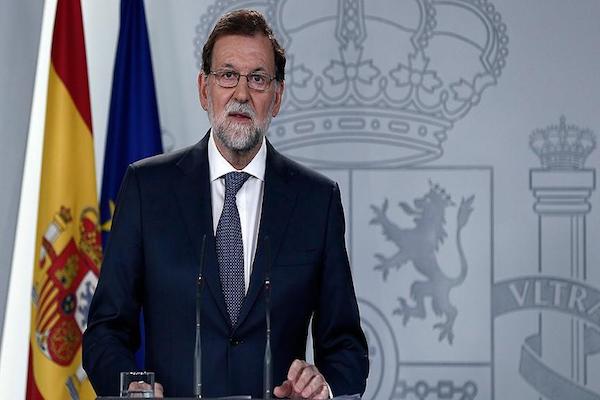 AvrupaLondon - A diplomatic game of chicken between Madrid and Barcelona continued on Wednesday as Spanish premier Mariano Rajoy demanded Catalan leaders clarify if they had declared independence or not.Speaking in a televised address after an emergency Cabinet meeting in Madrid, the Popular Party leader said the Catalan administration of President Carles Puigdemont needed to act to "avoid confusion" after a controversial independence vote.He said the Spanish and Catalan people needed "certitude" and said it was "necessary to have serenity back, as soon as possible".Mariano's remarks followed a Tuesday night speech by Puigdemont in which he said that while he supported declaring independence, it should be held off “for a few weeks” to allow for dialogue and mediation.An overwhelming majority of voters in the wealthy northeastern region opted for independence from Spain in an Oct. 1 referendum. However, the turnout was only around 43 percent and the vote had been declared illegal by Spain's courts.Scenes of Spanish police breaking up attempted voting also increased tensions in the region.Several European countries have indicated they would not recognize a unliateral declaration of independence by Catalonia.A formal declaration could leave the Catalan authorities open to prosecution. Spain's courts could empower the government to enact Article 155 of the constitution, allowing Madrid to suspend Catalan autonomy.