Mrs Bercow did not deny cheating on her husband 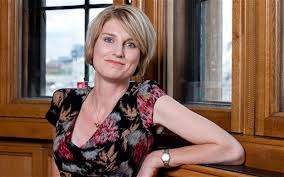 Mrs Bercow did not deny cheating on her husband, the Speaker of the Commons, with Alan Bercow as she left her home without her wedding ring.
She said she had hated the six "lonely" years living with John Bercow in Parliament, and vowed: “I won't go back.”
In a double blow to the Speaker, there was also speculation he could face a fight to keep his job, with rumours that Conservatives might use their majority to make a second attempt to oust him.

Mrs Bercow’s affair is said to have begun at the start of the general election campaign, when the Speaker campaigned in his Buckingham constituency and his cousin moved into a £1.2 million mews house in Battersea jointly owned by John and Sally Bercow. Alan Bercow’s wife Erica has confirmed that the affair happened, but the 57-year-old solicitor has now moved back into his marital home with his wife and ten-year-old son after the relationship with Sally Bercow ended a week ago.Mrs Bercow was at the Battersea house alone on Sunday, while the Speaker was at his grace-and-favour flat in Parliament with their three children.

Appearing without her wedding ring on she admitted she has had "a difficult marriage for a long time, primarily because we're living in Parliament and I hate it there."She said her husband John was "not a weak man" who was very forgiving however she added: "But I'm not sure I want to be forgiven."She "wouldn't at all blame him if he thinks 'right I've had enough, she's embarrassed me enough.' He's a good man and he's sucked it up enough in some respects."

Speaking outside her riverside house in Battersea, she appeared angry and resigned as she initially said she did not want to talk about the affair.
But of her husband she said: "I'm saying he's a great dad and a great speaker.
"Am I a good wife? I'm a terrible wife. I'm a terrible wife. I always have been. If I was John I wouldn't put up with me. I'm not even going to say that he'll take me back. I'm not even confirming that I've had an affair with the cousin. I'm not even talking about it. I'm not even talking about personal matters, not even going to talk about it. I don't think it's relevant. It's up to John, he's the public figure. No marriage is perfect, no marriage is perfect, if John wants me back he's crazy. If I was John, I wouldn't put up with it. But I'm a strong woman, I wouldn't put up with it. He's not a weak man, he's an amazing man. He loves me very much. Is he a forgiving man? Very. But I'm not sure I want to be forgiven.