Russian, US leaders discuss Iran, Syria, Ukraine, and Venezuela in Osaka, Japan, where both are attending G20 Leaders Summit 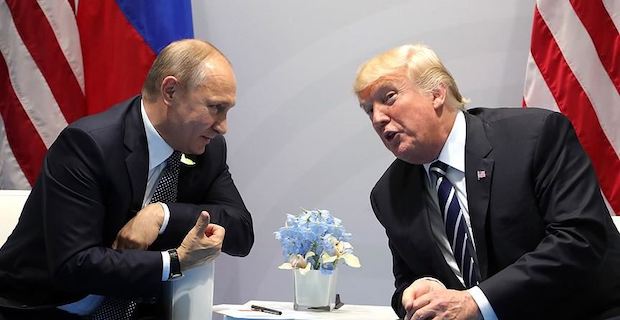 Russian President Vladimir Putin and U.S. President Donald Trump on Friday held a meeting on the sidelines of the G20 summit in Osaka, Japan.  According to a Kremlin statement, the two leaders discussed the situations in Iran, Syria, Ukraine, and Venezuela. The closed-door meeting lasted for 1 hour and 20 minutes, the Kremlin said.

"We will have a very interesting discussion, which will include such issues as trade, commerce, disarmament, protectionism, various other issues, and all this will be built on very good relations that we will have," Trump said, starting the meeting with Putin.

Asked about whether he would warn Putin against interfering in the 2020 U.S. presidential elections Trump said: "Yes, of course I will."

Russia was accused of meddling in the 2016 U.S. elections during which Trump was elected president.

He also said the two leaders had not discussed a vessel dispute between Russia and Ukraine.

Trump had cancelled last year's G20 meeting with Putin in Buenos Aires, saying another meeting would not happen until the issue was resolved.

The EU reiterated its call on Russia last week to release the captured Ukrainian sailors and return their naval vessels.

Ukraine has been wracked by conflict in its eastern regions since March 2014, after Russia’s annexation of Crimea. Fighting with separatists in the Donbass area has led to more than 10,000 deaths, according to the UN.

Relations between Russia and the U.S. have significantly deteriorated since the Ukrainian crisis of 2014, even as Trump has enjoyed an unusually close and trusting relationship with Putin.

The U.S. introduced several rounds of diplomatic and economic sanctions against Russia following the annexation of Crimea, a move viewed by the UN General Assembly as well as Turkey as illegal.

The situation took on another dimension in 2016 after Trump's election win. Russia was accused of interference in the U.S. elections, aiming to help Trump to become president as Moscow saw him as a more favorable candidate than his rival Hillary Clinton.

On Wednesday, asked by reporters about his upcoming talk with Putin, Trump said: “What I say to him is none of your business.”

Trump has come under fire for failing to include Cabinet members in his meetings with Putin, not briefing his own team about their conversations, and not issuing readouts of their talks, a standard diplomatic practice before Trump took office.

Keywords:
Vladimir PutinRussian President Vladimir PutinG20
Your comment has been forwarded to the administrator for approval.×
Warning! Will constitute a criminal offense, illegal, threatening, offensive, insulting and swearing, derogatory, defamatory, vulgar, pornographic, indecent, personality rights, damaging or similar nature in the nature of all kinds of financial content, legal, criminal and administrative responsibility for the content of the sender member / members are belong.
Related News