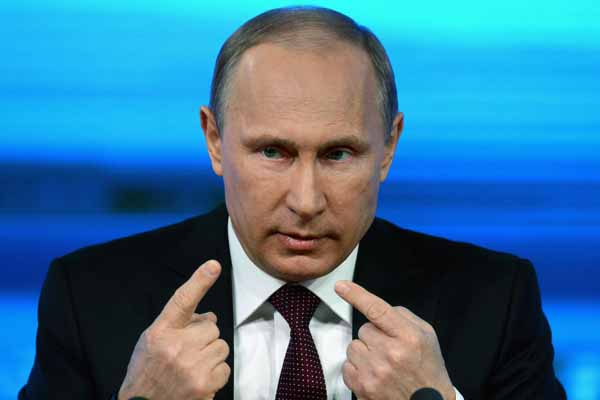 Russian President Vladimir Putin on Sunday called on Ukraine to immediately start talks on a political solution to the crisis in eastern Ukraine. U.S. Senate Foreign Relations Chair Says It’s Time to Arm UkraineGarry Kasparov: It’s a War, Stupid!U.S. Launches Airstrike Against Islamist Rebels in Somalia NBC NewsHow Safe Is Your Cloud? What to Know About Alleged Celeb Hack NBC NewsDid Handcuffed Man Kill Himself? Family Demands Probe NBC News Putin’s comment, made to national TV network Channel 1 and reported by Russian news agencies after they were broadcast in Russia’s Far East, said Ukraine should “hold substantive, meaningful talks, not about technical issues but about the question of the political organization of society and statehood in southeast Ukraine, with the goal of safeguarding the legitimate interests of those people who live there.” Despite the use of the word “statehood, Putin did not envision sovereignty for the two separatist eastern regions that style themselves as “Novorossiya” (New Russia ), his spokesman Dmitry Peskov said later, according to a Russian news report. Russia previously has called for talks between the central government and the separatist rebels in the east, which Ukrainian forces have been fighting since April and Russia has pushed for federalization that would devolve more powers to the regions.

Ukrainian President Petro Poroshenko released a peace plan in June that proposed an unspecified level of decentralization of executive powers and budgetary matters. But rebels so have rejected any talks unless Ukrainian forces halt their offensive.

Although Kiev and Western countries allege Russia has sent in troops and equipment to bolster the pro-Russia rebels, Moscow firmly rejects the accusations and distances itself from suggestions that it can wield influence on the rebels. Last week, after his first extensive meeting with Poroshenko, Putin rejected any suggestion that Russia could be involved in negotiating a cease-fire in the conflict, which has killed nearly 2,600 people according to the United Nations. Putin said Ukraine should stop the offensive.

“If anybody believes that in a situation where the cities and villages of east Ukraine come under direct fire that the militiamen will have no reaction to that, but will simply wait for the promised talks, then these people are prisoner to some illusions,” he said.

The Russian leader’s statement comes as Ukrainian forces battle against newly strengthened resistance from the rebels. After making gains in recent weeks, Ukraine has been forced to pull out of several towns over the past week. In addition, rebels have opened a new front along the southeast Azov Sea coast which could indicate the intention to establish a land bridge between Russia and the Crimean Peninsula that Russia annexed in March.

Ukraine says Russian tanks and troops took part in the move against the coast and NATO claims there are at least 1,000 Russian troops in Ukraine.

This week, Ukraine seized 10 Russian soldiers well inside the country. On Sunday, Col. Andriy Lysenko, a spokesman for the national security council, said nine of them had been given back to Russia in exchange for 63 Ukrainian servicemen.

“Ukraine has made a step forward,” Lysenko said of the release. “This is one of the major steps towards the Russian Federation — they were not taken to court, they were transferred.”