Pervez Musharraf at his home on the outskirts of Islamabad on Friday and presented him in court. 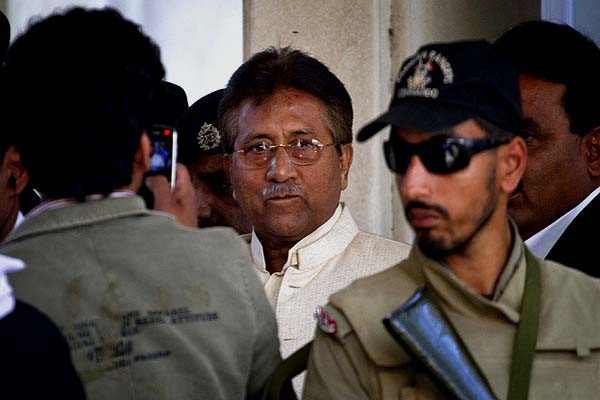 A Pakistani judge placed former president and army chief Pervez Musharraf under house arrest on Friday in the boldest step yet by the country's courts against senior military officers long deemed untouchable by the law. Police escorted Musharraf from the courtroom to his residence on the edge of Islamabad where he must remain for two days ahead of a hearing over allegations he unlawfully detained judges during a 2007 showdown with the judiciary. Ramping up pressure on the former paratrooper who seized power in a coup in 1999 and resigned in 2008, the judge ordered the case be heard in an anti-terrorism court on the grounds that detaining judges could be considered an attack on the state. Naveed Malik, a lawyer who was present at the hearing, said the retired general had voluntarily presented himself at the court and had asked to be detained at his home rather than go to jail.

"Now the police have to present him before the anti-terrorism court in two day's time," Malik told reporters outside the court.

One of Musharraf's lawyers said he would file a petition to overturn the arrest order at the Supreme Court later on Friday.

The spectacle of a man who once embodied the army's control over Pakistan being humbled by a court was a potent symbol of the way power dynamics have shifted. General elections to be held in Pakistan next month will be the first transition between elected civilian-led governments.

Musharraf returned to Pakistan after almost four years of self-imposed exile last month to stand in the polls but he was disqualified by election officials.

While the sight of a former army commander being arrested is sure to rankle some in the military, who see the armed forces as the only reliable guarantor of Pakistan's stability, Musharraf's ill-starred return has also bemused some former comrades.

"I don't think the army was in favour of him returning and tried to dissuade him," said General Hamid Khan, a former senior army commander. "But he decided to come, and now he has to face this. The army is staying out of it."

However, the order to place Musharraf under house arrest was surprising in a nation that has been ruled by the military for more than half of its 66 years as an independent nation and where the army's writ is almost never questioned even by civilian governments.

It was also a turning of the tables by a judiciary whose senior members themselves faced detention while Musharraf was in power.

Musharraf is accused of violating the constitution by placing judges under house arrest during the 2007 confrontation with the judiciary, when he sacked the chief justice and lawyers fought running battles with police. He has also been accused of treason for his decision to suspend the constitution and impose emergency rule.

He also faces a raft of other legal challenges, including allegations that he failed to provide adequate security to prevent the assassination of former primer minister Benazir Bhutto in 2007.