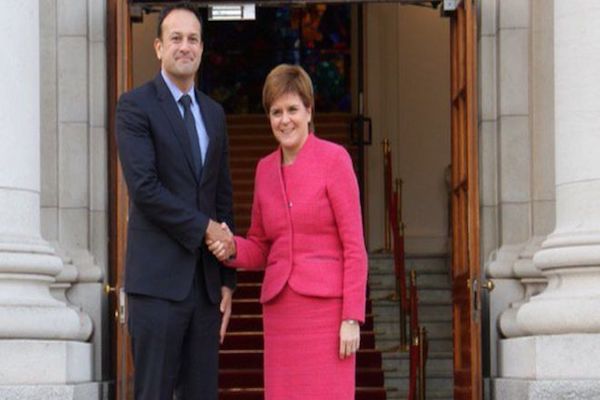 AvrupaLondon - Scotland's first minister told business leaders in Dublin she will argue for the Irish border to remain open in the wake of the UK's split from Europe.She also said the Republic and Scotland were united on virtually every issue of substance relating to Brexit.Ms Sturgeon had earlier met Taoiseach (Irish PM) Leo Varadkar to discuss both countries' position on Brexit.It was the first time she had met Mr Varadkar since his election and her second trip to the Republic of Ireland in less than a year.She later told an audience of about 1,500 Irish business figures that staying in the European single market and the customs union was the obvious answer to the negotiations.

She said: "The fact that the UK government is committed to leaving the EU means that Scotland - like Ireland, and like Northern Ireland - now faces a dilemma which is not of our choosing."We want to remain a full member of the EU but face being taken out against our will. "We deeply regret that."However, we believe that if the UK is determined to leave the European Union, it should remain a member of the single market and the customs union."In my view, that is the obvious compromise solution. It's democratically justified - the vote to leave was a very narrow one across the UK and two of the four nations of the UK chose to remain."In her speech to the Dublin Chamber, she also emphasised the social and economic links between Scotland and Ireland, and noted the shared interest in ensuring the growth of a global economy is matched by a focus on inclusion.Ms Sturgeon said leaving the single market will be deeply damaging for Scotland's businesses, universities, trade and jobs.

"On virtually every issue of substance relating to Brexit, the Irish government - and the Irish business community as a whole - has an ally in Scotland," the First Minister said."Like you, we didn't want Brexit. Like you, we support single market and customs union membership."And, like you, we know that Ireland's circumstances require particular attention and we will argue strongly for an open border."We believe that those positions are in the best interests of Scotland, of Ireland, and of everybody on these islands."Ms Sturgeon told business figures the global political developments were a challenge to build a fair and inclusive society.She added: "Scotland certainly hasn't got everything right, but - like Ireland - I think that we are at least facing up to the right issues."That's important from a political, social and moral perspective - and it's also crucial to ensuring that our economic policies are successful and sustainable."