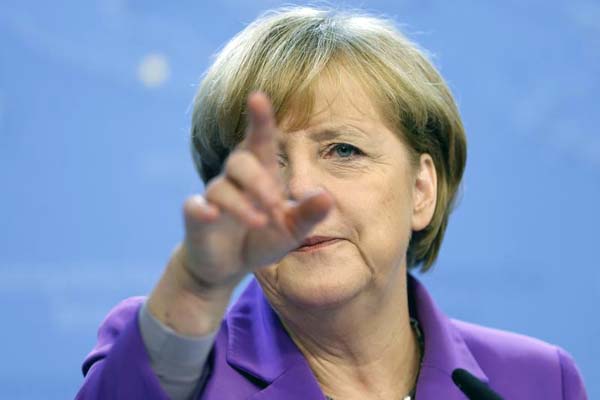 The ouster of Hans-Peter Friedrich on Friday over his handling of confidential information about a looming inquiry into a SPD lawmaker suspected of possessing child pornography has split Merkel's two-month-old coalition just as it was trying to enact urgently needed pension and energy reforms. Sources in Merkel's Christian Democrats (CDU) and the SPD said on Sunday party chiefs would convene after CSU chairman Horst Seehofer rebuked the SPD for actions that forced Friedrich to resign as agriculture minister.

"The meeting had been previously scheduled and the affair will certainly be one of the topics," a party source told Reuters, adding Merkel, Seehofer and SPD chairman Sigmar Gabriel would be joined by the parties' parliamentary heads.

Merkel, who began her third term in December eager to use an 80-percent majority in parliament to tackle domestic and euro zone issues, wants to defuse tensions over the scandal while Seehofer, head of her Bavarian sister party, wants revenge against the SPD for Friedrich, analysts said.

"It has the makings of a full coalition crisis but Merkel wants to protect her government and hopes it'll all go away," said Cologne University political scientist Thomas Jaeger.

Hannelore Kraft, SPD premier in Germany's largest state North Rhine-Westphalia, said the coalition was in a tight spot now. "It's a difficult situation when a minister resigns so soon after a government is formed," she told Bild am Sonntag.

Jaeger said Merkel's governing "grand coalition" could be in jeopardy if the scandal undermines the position of Gabriel, who was tipped off about the investigation by Friedrich in October and passed it along to two other SPD leaders.

What began as a small domestic scandal about SPD lawmaker Sebastian Edathy erupted into a major political furore when the SPD's parliamentary leader Thomas Oppermann said that Friedrich had warned the SPD that Edathy could be a target of an inquiry.

That raised questions whether Friedrich had inappropriately passed on confidential information about the looming investigation to Gabriel, possibly in violation of the law.