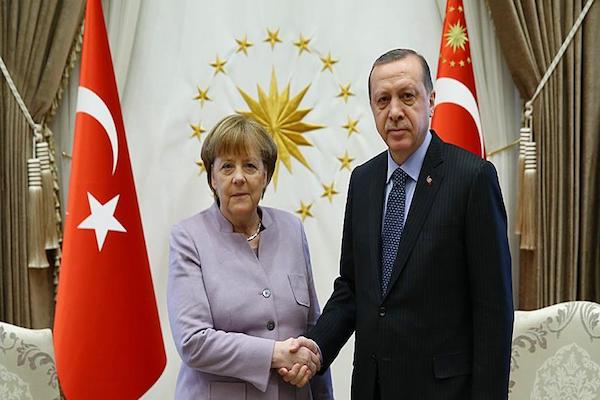 "Turkey remains an extremely important neighbor and an extremely important partner for us Germans, as well as for Europeans," Steffen Seibert told a press conference in Berlin. He said Merkel would discuss various important topics with her Turkish counterparts in Ankara, and would seek common solutions on issues of common interest.

"The talks would cover a number of topics, including the further implementation of the EU-Turkey refugee agreement, the situation in Syria, the Cyprus question, the cooperation within NATO and bilateral issues between Turkey and Germany," he said.

Thursday’s visit will be Merkel’s sixth visit to Turkey within three years --and the first after last July's failed coup-- despite criticism by opposition parties which argued that she made Germany too much dependent on Ankara in addressing the refugee crisis.

The EU’s largest economy took in a record 890,000 asylum seekers in 2015, but the refugee influx has strained local authorities, and far-right parties exploited the crisis.

During her Ankara visit, Chancellor Merkel is expected to renew support for the EU-Turkey refugee deal and highlight positive results achieved so far.

Championed by Merkel, the March 2016 agreement has been successful in stopping the refugee influx, with the number of asylum seekers arriving in Germany falling down to 280,000 in 2016.

German opposition parties criticized Merkel for the timing of the visit and claimed it might be interpreted as support for the Turkish government before the upcoming referendum in Turkey on constitutional reforms.

Her spokesman dismissed these claims, and when asked about Merkel’s opinion on the referendum, he declined to comment.

"The question of constitutional referendum is something to be decided by the Turkish voters," he said.

A package of 18 constitutional reforms --passed by the Turkish parliament last weekend-- is expected to be voted on in a referendum in April.

The changes effectively shift Turkey from a parliamentary system to a presidential one by making the president the head of the executive and abolishing the prime minister’s role. The reforms also allow the president to issue legally-binding decrees.

If passed, they will come into effect when presidential and parliamentary elections are held in November 2019.