Chancellor Merkel, do not have the intention to break off diplomatic relations with Turkey 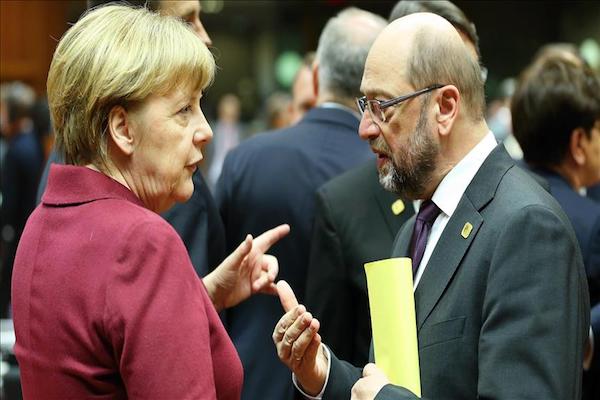 AvrupaLondon -Chancellor Angela Merkel and her centre-left rival Martin Schulz clashed over Germany’s Turkey policy in a televised debate Sunday night, three weeks ahead of the September 24th general elections.The Social Democrat Party (SPD) leader Schulz called for a tougher line on Turkey, and in a surprise move, suggested immediately stopping Ankara’s EU membership talks, and freezing €4 billion ($4.68 billion) pre-accession funds.“If I would become the Chancellor, I would stop Turkey’s EU membership talks,” he said, amid escalating tensions between Germany and Turkey.Schulz had long advocated Turkey’s EU membership, but signalled a policy charge in recent weeks, after recent polls revealed a considerable decline in support to his SPD.The top chancellor candidates went into the debate on Sunday night, with polls showing Merkel’s Christian Democratic bloc (CDU/CSU) was likely to gain 38 percent of votes in the September 24 elections, while the SPD was polled at 24 percent.

Despite Schulz’s unexpected political manoeuvre on Sunday night, Chancellor Merkel maintained her cautious approach and defended her policy of engaging in dialogue with Turkey to overcome ongoing tensions.“I do not have the intention to break off diplomatic relations with Turkey,” she stressed.Merkel also argued that stopping Turkey’s EU membership talks might be a wrong message to Turkish citizens who continue supporting democratic reforms, and the country’s EU membership perspective.However, she backed recent economic measures which aimed at increasing political pressure on Ankara, and also spoke about the possibility of updating travel advice on Turkey.Commenting on Schulz’s call to end Turkey's EU membership talks, Merkel underlined that such a move needs the support of other EU member states.She also recalled that so far the coalition government's Foreign Minister Sigmar Gabriel, a social democrat politician, did not support such calls.But Merkel said, she would now talk to her colleagues and see if there was a common position on that.Tensions between Berlin and Ankara further escalated last week, as German politicians sharply criticized arrests of two German citizens of Turkish-descent on Thursday in Turkey, on suspicion of supporting terrorist groups.