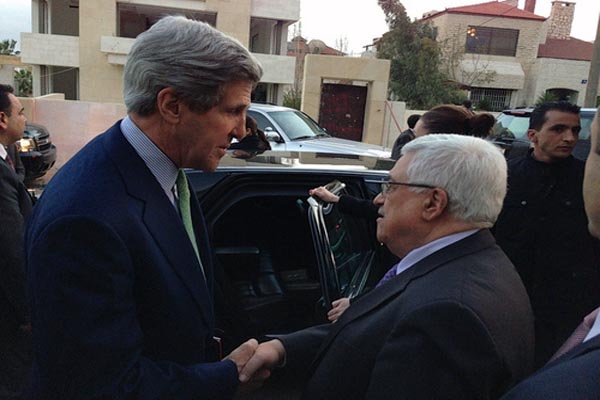 U.S. Secretary of State John Kerry met a Palestinian negotiator in Jordan to discuss resuming peace talks with Israel, officials said, with chances of an immediate breakthrough appearing slim before he leaves later on Friday. The Palestinian leadership on Thursday did not accept Kerry's latest proposal to restart the talks that have been stalled since 2010, but signalled they were leaving the door open for him to continue his peace push. Kerry, on his sixth peacemaking visit to the region since March, met Palestinian Chief Negotiator Saeb Erekat in Amman to discuss Palestinian terms for restarting the talks. Kerry was due to fly back to theUnited States later on Friday. He has given no details on where he believes the two sides might give ground, although after talks with Palestinian President Mahmoud Abbas in Jordan on Wednesday, he said the gaps had narrowed "very significantly".

Negotiations, which have ebbed and flowed over two decades, collapsed in late 2010 in a dispute over Israeli settlement building in the occupied West Bank and East Jerusalem, territories it captured in the 1967 Middle East war.

The Palestinians want that land as part of an independent state and have demanded Israel halt all settlement construction and recognise the pre-1967 lines as the basis for negotiations over the future-state's borders before peace talks begin.

A senior Palestinian official speaking on condition of anonymity said Erekat was expected to tell Kerry that the Palestinians appreciate his efforts and "call upon the United States to ask the two sides to resume negotiations on the basis of the two-state solution, recognising the 1967 borders".

Israel has balked at the Palestinians' demands and says talks should start with no preconditions.

Israeli Deputy Foreign Minister Zeev Elkin said to establish a Palestinian state on the 1967 borders would be "suicidal".

"A negotiation in which you first say what you are willing to give up ... is not the kind of negotiation that leads to good results in the Middle East," Elkin told Israel Radio.