Japan wants to negotiate a trade deal with the whole of Europe and not its individual member states, the country’s Prime Minister Shinzo Abe said on a trip to London Thursday 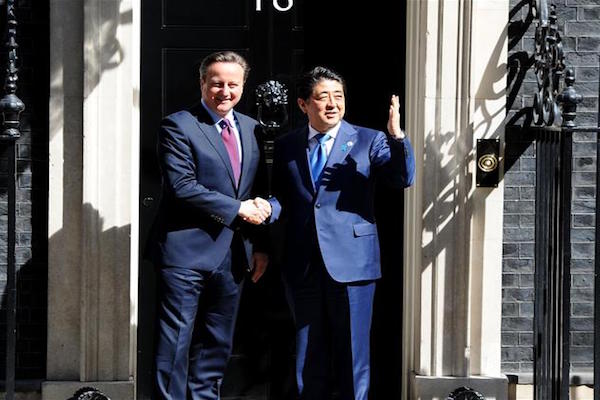 LONDON (AVRUPA TIMES)-Japan wants to negotiate a trade deal with the whole of Europe and not its individual member states, the country’s Prime Minister Shinzo Abe said on a trip to London Thursday. Abe used his visit to call on Britain to remain an EU member because a Brexit would make it “less attractive” to Japanese investors.

“British membership is also best for Japanese investors within the U.K.,” he said at a press conference with his U.K. counterpart David Cameron, according to the Daily Telegraph.

“Many Japanese companies set up their operations in the U.K. precisely because the U.K. is a gateway to the EU.

“A vote to leave would make the U.K. less attractive as a destination for Japanese investment.”

Abe’s remarks come less than a fortnight after American President Barack Obama issued a similar warning that a post-Brexit Britain would have to join “the back of the queue” in waiting for a trade deal with the United States.

Cameron told the same press conference that Japan mattered “enormously to the prosperity of the U.K.” and that Japanese firms saw Britain as a gateway to Europe.

He continued: “We benefit more from Japanese investment than any other country in the world apart from the U.S.

“By the end of 2014, the total value of Japanese investment in the U.K. was £38 billion ($55 billion) – that’s a huge figure. It represents jobs being created, companies thriving, and our manufacturing base expanding.”

Cameron is campaigning for his country to remain a European Union member ahead of an in-out referendum on June 23.