The event – the first of its kind for British Turks – was held at the Turkish Cypriot Community Association in North London. 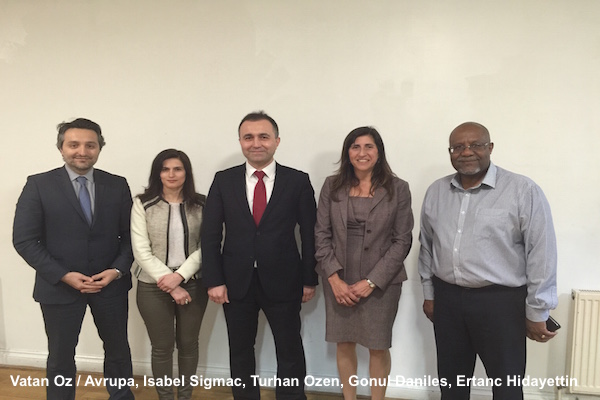 29 April 2015, London: All four British Parliamentary candidates of Turkish origin were on the panel for tonight’s historic UK General Election debate organised by T-VINE Magazine. Styled along the lines of Question Time, a variety of questions from education to the economy, identity and community apathy were put to Gönül Daniels, Ibby Mehmet, Dr. Turhan Özen and Isabel Sigmac during the 2-hour session, chaired by T-VINE columnist and respected community activist Ertanç Hidayetin.

The event – the first of its kind for British Turks – was held at the Turkish Cypriot Community Association in North London. The candidates, between them representing Britain’s three main political parties, were each given 5 minutes to introduce themselves and explain how and why they got into politics. For mother-of-four and businesswoman Gönül Daniels, her daughter being refused entry to their local school prompted her to become a school governor. She was then encouraged to get more politically active by the Conservative Women’s Organisation. Ibby Mehmet – at 28, the youngest of the four candidates – become politically active while studying law at Essex University. He went on to become the first-ever Turkish Cypriot to be elected the President of a British university’s Students’ Union.

The first issue the panellists were quizzed on this evening was education. The candidates clashed over the quality of schools, overcrowded classrooms, funding, and whether academies and free schools were working. The underachievement of Turks at schools was also touched upon.

There was heated debate over the economy. The Lib Dem’s Turhan Özen and the two Tory candidates spoke about how Britain’s huge deficit had been halved under the Coalition and the careless banking sector reigned in. Mehmet hit back, claiming austerity had hit Britain’s poorest the hardest, pointing the finger at private sector companies such as Sports Direct, who were allowed to exploit zero-hours contracts for profit, employing people without being obliged to give them guaranteed work or income. A member of the audience challenged the Labour candidate over his claim, stating ‘the worst offenders were the public sector and those most affected were care workers’.

The economic debate spun into a discussion about the lack of affordable housing, poverty and food banks. Each candidate claimed their party’s policies were best suited to help alleviate these problems, although Daniels felt “charities and churches will always be needed” to assist society’s poorest.

Identity was also discussed. Özen stated the political discourse over migrants and Islam had been “poisoned by UKIP”. Sigmac explained her constituency in the heart of Birmingham has a big Muslim community, which “clearly has issues”, but they were passive and not vocal, so nothing could get done. She urged those from ethnic communities to respect the country they live in, learn the language and integrate. Daniels added ‘integrating did not mean losing your identity’. She also pledged she would host Turkish surgeries if elected, to enable people in the community to raise their issues more easily.

All four candidates urged British Turks to vote in next Thursday’s General Elections. Sigmac appealed to female voters in particular, reminding them that “women had died” to secure equal franchise, so it was vital they exercised their right to vote. She added that being involved in the political process need not require a huge commitment. People could simply join their local party or become campaigners on an issue they felt passionate about.

T-VINE editor İpek Özerim said, “Tonight was fabulous on several counts. We heard from four excellent candidates, each assured, knowledgeable and keen. Their personal experiences demonstrate getting into British politics is easy. The audience also played their part with probing questions and incisive comments, while Ertanç ensured the discussions were fluid and the candidates did not stray.” Özerim added, “It’s strange this has been the first such event, but it most definitely should not be the last. The huge turnout of Turkish media tonight shows interest is high and I hope that translates into many of our community voting next Thursday. We can’t influence decision-making by sitting it out on the sidelines – no vote, no voice!”

The four candidates standing in next week’s elections are: