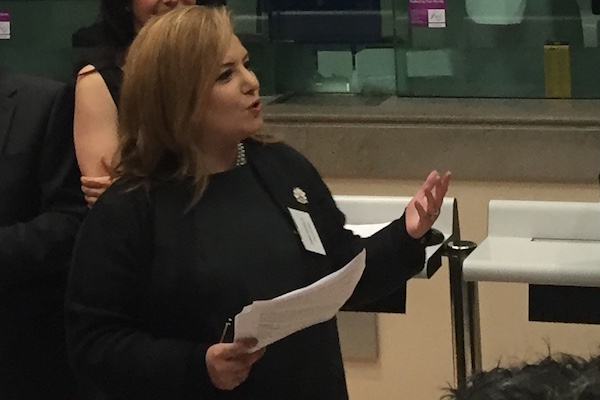 The Grassroot Diplomat Initiative Awards recognises the achievements of UK-based diplomats and politicians who are representing civilian interests at the highest level. Winners were chosen out of 60 shortlisted nominees including John Glen MP, Joanna Cherry QC MP, Jonathan Edwards MP, Ambassador of Croatia Ivan Grdesic, Deputy Dean of Diplomatic Corps HE Roy Warren Blackbeard and Swedish Ambassador HE Nicola Clase amongst the mix.

Grassroot Diplomat also provided the title of ‘Honouree’ to Lord Loomba CBE for his work on recognising the rights of international widows, Karen Lumley MP for outstanding business support to local constituents, Mexican Ambassador HE Diego Gomez Pickering on the embassies varied activities during the Dual Year of Mexico, Caroline Nokes MP for standing up against unrealistic body standards for women in the fashion industry, Dominican Republic Ambassador HE Federico Cuello Camilo in making his country the third exporter of exotic vegetables in the UK, and the Embassy of Romania for outstanding support to the League of Romanian Students Abroad.

Talyn Rahman-Figueroa, founder and Executive Director of Grassroot Diplomat notes: “In four short years, we have created a powerful roster of positive role models who have proven their worth as leaders for the people. Winning an award is nothing if you can’t lead by example every day. Through the active work of our awarded government representatives, we will build legends, memories, and powerful stories that inspire others for generations.” The young Director wore a Pakistani inspired black gown sponsored by Zayna Coutre, as part of her soft power diplomatic representation of the world.

Rehman Chishti MP for Gillingham and Rainham won the Grassroot Diplomat Policy Driver Award for Countering Extremist Propaganda. Since February 2015, Mr Chishti ran a high profile campaign to convince the Government and media to refer to Islamic State as “Daesh” as the terrorist organisation is neither Islamic nor a state. After several months of campaigning, the Prime Minister David Cameron publicly urged the government to fully adopt Daesh into their lexicon to help reduce public fear and paranoia against Muslims and the religion globally.

Sharon Hodgson MP for Washington and Sunderland West won the Grassroot Diplomat Social Driver Award for her Holiday Hunger Campaign. Ms Hodgson set up the “Holiday Hunger Task Group” to tackle the impact of school holidays on struggling and starving families. As a result, schools across the UK are opened during holiday offering sporting activities and breakfast clubs with the assistance of parents volunteering their time.

Holly Lynch MP for Halifax won the Grassroot Diplomat Business Driver Award for her Fairtrade Halifax initiative. Coming from an export trade background, Ms Lynch wanted to bring issues of international development to her local constituency. She created Fairtrade Halifax, which is the latest addition to Fairtrade Yorkshire’s rapidly growing network of local Fairtrade groups where Palestinian Fairtrade farmers attended the event to talk about how Fairtrade benefits them and their communities.

Jamaican High Commissioner Her Excellency Aloun Ndombet-Assamba won the Grassroot Diplomat Policy Driver Award for Air Passenger Duty campaign. Introduced by Britain in 1994, the Air Passenger Duty has made flying into the Caribbean more expensive. Ms Ndombet-Assamba worked closely with other Caribbean countries and her lobbying efforts led to the Government announcing all long haul flights to carry the same tax rate as the US, which increased Jamaican tourism by 31.5% in the last two years.

Polish Ambassador His Excellency Witold Sobkow won the Grassroot Diplomat Social Driver Award for his work on sports and interfaith diplomacy. Mr Sobkow has been focusing sports diplomacy on volleyball and football, providing financial sponsorship and marketing support to Polish teams in leagues and tournaments. Also, whilst being a Catholic, Mr Sobkow studied Islam to gain a better understanding of the religion, and is working on interfaith projects to fight xenophobia and break stereotypes of Muslim and Jewish communities.

Emma Edhem, Common Councilman of the City of London Corporation and Chairman of the Turkish-British Chamber of Commerce and Industry, won the Grassroot Diplomat Business Driver Award for her leadership on driving the Chamber of Commerce. The first female Chairman of the Turkish Chamber, Ms Edhem helped them become a driving force for business expansion, and has since been approached by other countries including Hungary to help raise their Chambers to functioning levels. She also founded “The Young Entrepreneurs and Professionals Platform”, offering young entrepreneurs links to City Financiers.

Grassroot Diplomat is a social entrepreneurial diplomatic consultancy with a mission to build trust and strengthen relationships between governments and civil society. As an independent agency, Grassroot Diplomat shows no allegiance to a solitary government but will act in the interest of the people, no matter where they are or what state their country is in. We break the traditional mould of diplomacy by working outside of rules and protocols, looking at missions through the lens of the people, and offering strategic consultancy on how to re-brand a nation through public diplomacy activities.