DOLLAR 16,27
EURO 17,48
GOLD 970,80
BIST 2.445,56
Enfield Chase Woodland project wins a top industry award
The new Mayor of Enfield has been formally sworn in and the borough’s...
The seasonal fruit picking industry is struggling because of Brexit and...
London Craft Week, A Taste of Türkiye at Yunus Emre Institute London
Make a splash this summer with free swimming lessons
Dr Anna Colton's tips for parents and guardians during the exam season!...
An English Oak sapling tree has been planted in Enfield to commemorate...
Rishi Sunak is to warn that the next few months will be tough
Bank station’s new, spacious southbound Northern line platform officially...
Customers will also spot Royal station announcements and digital signs...

Finnish President Sauli Ninisto has praised Turkey's Marmaray project, saying "I passed over the Marmara before, now I want to pass under it". 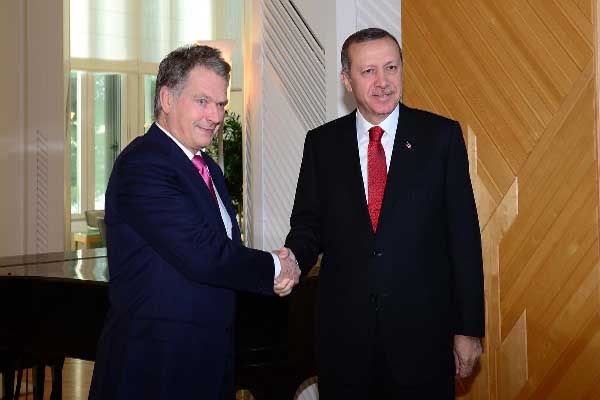 Finnish President Sauli Ninisto said on Wednesday that Marmaray, a rail transport project in the Turkish city of Istanbul, was a good project.

"Marmaray is good project. I passed over the Marmara before, now I want to pass under it," said Finnish President.

Erdogan, accompanied by Turkish Minister of EU Egemen Bagis, Minister of Energy and Natural Resources Taner Yildiz, Minister of Transport and Communication Binali Yildirim and Minister of  Forestry and Water Works Veysel Eroglu, pointed out the importance of Turkey-Finland relations.

The meeting continued closed to press.

The meeting was also held closed to press at Finnish Speaker's Office.