THE EUROPEAN COOPERATION DAY AND THE INTERNATIONAL DAY OF PEACE 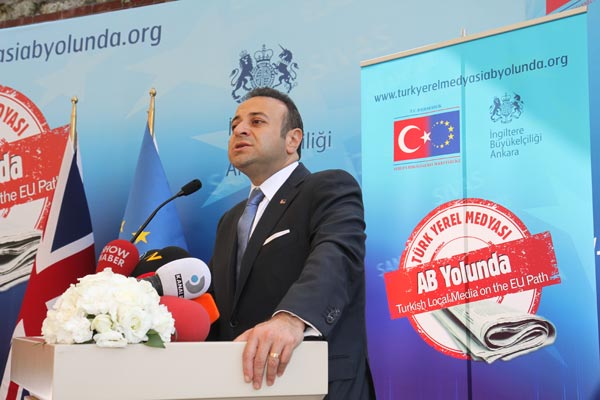 The statement of Minister for EU Affairs and Chief Negotiator of Turkey, H.E. Egemen Bagis, on the occasion of the European Cooperation Day and International Day of Peace:

"On the occasion of 21 September European Cooperation Day, celebrated this year for the first time, we would like to express our hope that all conflicts, disputes and fighting in the world are ended and emphasise the importance of always keeping alive the idea of cooperation. In this context, we would also like to remind once more that the transformation of the EU, one of the most successful regional cooperation projects in the world, into a global cooperation project depends on the accession of Turkey to the EU.

In fact, the solutions to the problems confronting the EU today lie with increased cooperation rather than the tendencies of isolationism and exclusionism. The EU continues to be a significant model demonstrating how deep-rooted disputes and conflicts may be resolved through cooperation.  However, the future of the EU depends on adhering to the idea of cooperation and continuing to strengthen the motivation for cooperation. Turkey’s accession process to the EU is a threshold for the extent that the EU is able to keep alive the notion of cooperation.  With the membership of Turkey, the EU will increase its global influence.

Today, as we celebrate the European Cooperation Day, I would like to commend our institutions which are the pioneers of this cooperation in the field and carry out the Cross-Border Cooperation Programs, as well as our local institutions, professional bodies, universities and NGOs which are the beneficiaries of the projects. These, contribute significantly not only to their regions or provinces, but also to the solution of problems of our neighbours in the Black Sea Region and the Balkans, with whom we share a common history and common ideals for the future. These contributions not only keep alive the aims of cooperation, but also convey significant messages on behalf of world peace.

On the occasion of this special day, which was declared by the United Nations in 2001 as the International Day of Peace, I would like to express my wish that peace will always prevail and not be limited to only one day.

We, as Turkey, country of peace, call on the whole world to embrace peace, brotherhood and justice.

Here today, I would like to emphasise the importance of the environment of peace ensured by the EU in Europe, which has been the site of major wars in history. The EU has enabled a Europe devastated by two world wars in the 20th century and divided by the Cold war to move on after these destructive wars, and  all EU member states to unite in the pursuit of the common objectives of development  and democratisation in peace.

We have followed the motto “Peace at home, peace in the world” as a policy of state and, within the framework of this understanding, we initiated the accession process to the EU, the most comprehensive peace project in the world, nearly 53 years ago.  However, at times there have been attitudes which conflict with the EU’s spirit of peace and Turkey has faced difficulties in the accession process that are unprecedented in the history of the EU.

The founding states of this project, which has united many formerly hostile states around common values, need to put aside their daily policies and take a step forward to sincerely support the EU membership of Turkey in order to further strengthen world peace. The EU will remain as a peace project only on the European continent so long as Turkey’s membership is not realized.  An EU strengthened with the membership of Turkey, which represents values that negate the clash of civilizations thesis,, would be a global peace model that is a source of inspiration for humanity.

It is our responsibility to leave a peaceful world to the future generations. Therefore, the awareness of this responsibility makes it essential that everyone unites around the efforts to establish a sustainable peace.

I would like to extend my congratulations on the occasion of the European Cooperation Day and International Day of Peace and hope that the vision of cooperation and peace will prevail all over the world."