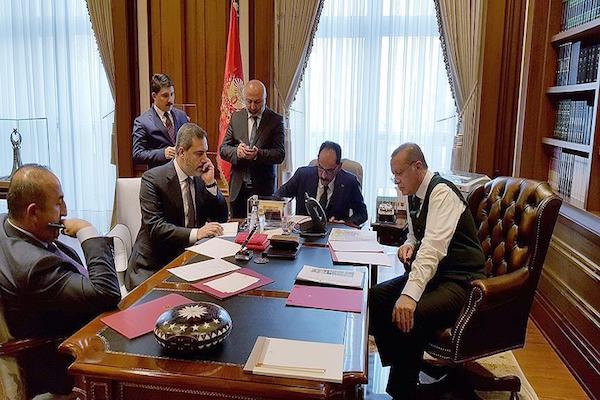 AVRUPALONDON - President Recep Tayyip Erdogan and his American counterpart Donald Trump spoke over the phone Friday to discuss the recently-concluded Sochi summit, Syria crisis and bilateral ties, according to a Turkish presidential source.

The leaders also discussed other regional issues, the source, who spoke anonymously due to restrictions on talking to the media, said.

Following the phone call, Erdogan tweeted: “We had a fruitful phone conversation with the U.S. President Donald Trump today."

Earlier in the day, Trump had announced his phone call with Erdogan on Twitter.

“Will be speaking to President Recep Tayyip Erdogan of Turkey this morning about bringing peace to the mess that I inherited in the Middle East.

“I will get it all done, but what a mistake, in lives and dollars (6 trillion), to be there in the first place!” he tweeted.

During the meeting at the Black Sea resort, the three leaders had agreed on gathering a congress of Syrian groups to advance a political solution for the war-torn nation.