ERDOĞAN: EP VOTE ON TURKEY HAS NO VALUE

The result of the vote on Turkey in the European Parliament has no value. 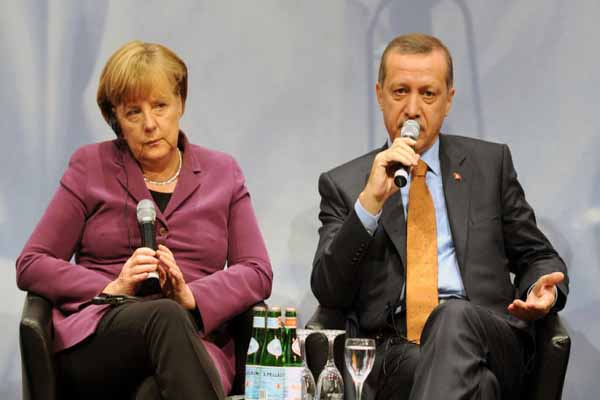 President Recep Tayyip Erdoğan delivered a speech in Istanbul at the 32nd Meeting of Ministers of the COMCEC (Standing Committee for Economic and Commercial Cooperation of the Organization of the Islamic Cooperation).

Following are highlights from Erdoğan’s speech:

* As the Muslims, we carry the burden of the world on our shoulders. In just one year, 5,000 oppressed people fleeing famine, poverty and misery have drowned in the dark waters of the Mediterranean. More than 10,000 refugee children fleeing the chaos in Syria and Iraq are missing in Europe, and nobody knows where they are. Countries that give us lessons on democracy, freedom and human rights at every opportunity are unable to protect children who have taken refuge in their countries.

* The individual in Pennsylvania poses a threat not only to Turkey but also to the countries where they have infiltrated. This organization is the neo-Assassins of our day.

* Every moment lost to the elimination of the FETÖ may lead to bigger problems.

"Can there be such an illogical thing?"

* Let us adopt a common attitude and no longer be countries that are exploited. My African brothers explained themselves how Europe exploited them. Let us determine our future on our own. You may know the decision taken by the US Congress on September 11. They said that both towers were hit by Saudi Arabia and everyone was free to file a case. Can there be such an illogical thing?

"It is Time to Raise Our Voice"

* We should monitor them very closely. The game is still played on Muslim countries. They act as if we are raising terrorists and they have nothing to do with this issue. All these decisions have a double standard. Attacks on Muslims are spreading day by day. They are burning down our mosques. They are attacking our Muslim brothers. All these incidents are taking place in Europe, in the West. It is time we raised our voice and our reaction. We cannot tolerate these any longer. For if we do not react, those who behave this way will find more courage.

"They Now Call Trump a Dictator"

"Women Should Take Part in All Activities"

* The COMCEC meeting that we are holding today is very important. We must demonstrate our capacity to produce solutions. We discussed problems and solutions with Islamic geography. I am convinced that the women should take part in all these activities. We have adopted and implemented the Action Plan 2025, which will shed light on our work for 10 years.