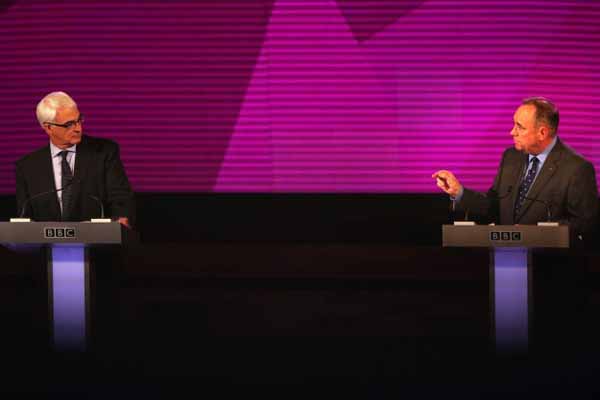 Scotland's First Minister - and leader of its independence movement - has staged a dramatic fightback in a live television debate, nearly three-quarters of viewers saying he defeated the leader of the Scottish anti-secessionist campaign. It was a welcome performance for a movement that has lost ground to those seeking to keep Scotland within the United Kingdom. According to a Guardian newspaper survey conducted minutes after the debate ended late Monday, 71 percent of viewers said the pro-independence Alex Salmond defeated his rival Alistair Darling. The debate was billed as the last chance for the two men to set out their message to a mass audience before postal ballots for absentee voters are sent out barely three weeks before a September 18 referendum. The 90-minute program – held in an art gallery in Scotland’s largest city, Glasgow – was a bad-tempered affair with the two men frequently shouting over each other. Salmond, who as First Minister leads Scotland’s regional government, frequently stepped out from behind his lectern to answer questions put to him by the BBC studio audience. His performance, however, was more self-assured than in the first debate earlier this month.

“Few societies anywhere on earth have secured this opportunity to vote themselves into independence. It is an opportunity which may not come our way again,” he said.

“This our time. Our moment. Let’s seize it with both hands.”

But Darling, a former UK finance minister, said Salmond’s plans for independence were overly dependent on income from oil and gas reserves off the coast of Scotland.

“So if you lost that sum in any one year, Scotland would have to make good on that either by raising taxes elsewhere or cutting public expenditure.”

Scotland spent more money than it raised in all but one of the last 22 years, he added.

But there were groans from the studio audience when Salmond raised the question of an independent Scotland’s currency, an issue that has dominated the referendum campaign.

The First Minister said he was seeking a mandate from the Scottish people to retain the British pound in a currency union with the remainder of the UK.

But Darling said the pound belonged to the UK, not any one of its individual countries, and that they would not agree to a currency union.

Opinion polls have given the "No" campaign a lead of between six and twenty points over the last month. The last survey to put the "Yes" vote ahead was published August 2013.