The biggest success would be a comprehensive agreement, UN envoy says at restarted Cyprus talks in Swiss Alps 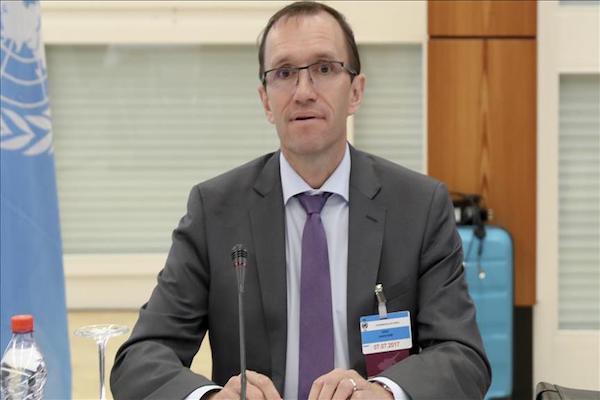 He made the remarks after the opening of restarted UN-sponsored talks between Turkish Cypriot President Mustafa Akinci and Greek Cypriot leader Nicos Anastasiades in the Alpine resort of Crans-Montana, Switzerland, aiming to reunify the Mediterranean island after a four decades-long split. “The biggest success would actually be a comprehensive agreement,” said the UN’s Espen Barth Eide. “That’s hard but not impossible in the sense that so much has been discussed that if this is really productive and we take our time and we focus on the essential, it is not beyond reach, it could happen. Short of that we could have not a deal, not a framework deal but a breakthrough on the key issues.” Referring to the talks’ two-table format, he added, “We started to address the critical issues that will be the focus of ‘table one,’ which are the security and guarantees questions, which are those that pertain to all participants of the conference.” Other issues under discussion in an envisioned federal republic of Cyprus -- territory, governance and power-sharing, economy, property rights, and the EU -- have been largely settled. "The negotiations on the long-running conflict are the best chance, but maybe not the last one, to get an agreement," Eide said. “At the end of the day of course it is the responsibility of the conference participants to go that final mile, to think outside the box and try some new ideas so that we can finally come down from this beautiful Swiss mountain with a plan.”

UN Under-Secretary-General for Political Affairs Jeffrey Feltman said that Secretary-General Antonio Guterres wanted “to pass on the message to the two leaders and the guarantor parties that they should seize this opportunity. This is a historic opportunity." He added, "What is notable about this process is that the two leaders have taken the process further than their predecessors have taken it. They have come up with a remarkably expansive set of convergences between the two sides." About the morning session, Feltman said, “There was a sense that whatever the disagreements are over history, now is the time to come together for the future of Cyprus.” The UN is seeking a peace deal uniting Cyprus under a federal umbrella, which could also define the future of Europe’s relations with Turkey, a key player in the conflict. The last attempt to resolve the crisis ended in failure in 2004 after the UN-backed Annan plan was rejected by Greek Cypriot voters in a referendum. At the talks, Akinci and Anastasiades met, joined by Eide, along with representatives of guarantor countries, Turkish Foreign Minister Mevlut Cavusoglu and his Greek counterpart Nikos Kotzias. According to Turkish diplomatic sources, Cavusoglu said on Wednesday, "We are here for a solution. The 50-year conflict should come to an end." The first session of today's meeting started on a good note when Kotzias turned to Cavusoglu and mentioned how temperatures are set to soar to 43 C (109 F) in Greece tomorrow and in response, Cavusoglu said he should stay in the mountains rather than fly back.

In a statement on Tuesday, Guterres said, "The opportunity for the reunification of Cyprus is now finally before us." "I call on all concerned players to seize this opportunity, for Cyprus first and foremost, but also for the wider eastern Mediterranean region," he said. Guterres urged all participants in the talks to "demonstrate the will and leadership required to conclude a comprehensive settlement". On Monday, Akinci described the talks as a "decision conference" for the future of Cyprus.  "I will set out on this journey with this positive thought in mind and a cautious optimism," Akinci said. The restart of Cyprus talks on June 28 was announced earlier this month after Guterres met with the Turkish Cypriot and Greek Cypriot leaders in New York. The eastern Mediterranean island has been divided since 1974, when a Greek Cypriot coup was followed by violence against the island’s Turks, and Ankara's intervention as a guarantor power. Akinci and Anastasiades have been involved in reunification talks to create a federal state since May 2015. The pair met several times in Geneva and Mont-Pelerin last year, but their last meeting in February was fraught with controversy over a Greek Cypriot decision to introduce a commemoration of the 1950 Enosis referendum on unification with Greece. Both sides had agreed on most of the issues in the reunification deal but the sticking points, including a security and guarantee system, remain unresolved.