Binali Yildirim and Theresa May meet in London

May hosted a Turkish delegation led by Yildirim for talks before a one-to-one meeting with the Turkish premier. 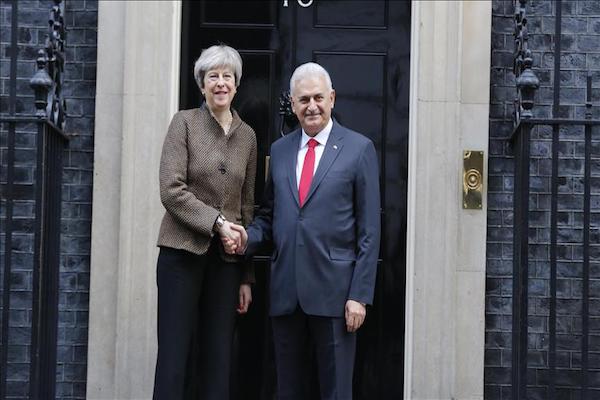 AVRUPALONDON - May hosted a Turkish delegation led by Yildirim for talks before a one-to-one meeting with the Turkish premier.

A statement from Turkish prime ministry said the meeting focused on expressing a determination to further develop cooperation between the two countries, especially in the economic, trade and defense sectors.

The two premieres expressed satisfaction over bilateral and regional issues between Turkey and the U.K. as two friendly and allied countries. They agreed to maintain bilateral contacts and cooperation in many fields including the fight against terrorism and Cyprus, the statement added.

Yildirim, who is in the British capital at the invitation of May, is expected to meet British Foreign Secretary Boris Johnson and Home Secretary Amber Rudd in the afternoon.

The meeting with May follows Yildirim’s engagement on Monday morning with a group of British businesspeople, which focused on new investment opportunities.

Yildirim said the visit was intended to see “how we can carry Turkey-U.K. relations further”.

“Turkey is located in a very dynamic geography,” and any investment there would also mean investing in a region with around 1.5 billion people, he added.

Yildirim and his team will be hosted at a dinner organized later by Lord Janvrin, the British prime minister’s trade envoy to Turkey.

CEOs from prominent British firms such as BP, Shell, Lloyds, Vodafone, HSBC, Rolls Royce and GlaxoSmithKline are expected to attend.