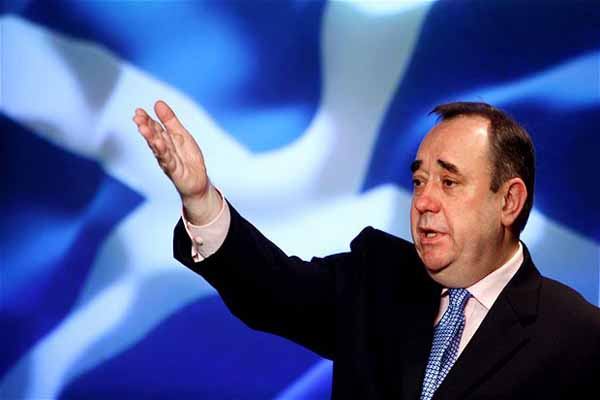 Alex Salmond has accused the Treasury of leaking market-sensitive information about the future of RBS in Scotland in a dirty tricks campaign to undermine the independence campaign. The first minister said it was a matter of "enormous gravity" for an unnamed Treasury official to tip off the BBC on Wednesday night about a decision by the bank to move its registered office to London in the event of a yes vote. That leak – confirmed on Thursday morning to the London Stock Exchange by RBS, sent the bank's shares down overnight on the Asian markets, the first minister said.

Salmond said he was demanding a formal leak inquiry by Sir Bob Kerslake, the head of the UK civil service, and would be sending in an official complaint. He also insisted the BBC had a duty to cooperate, implying it was duty bound to reveal its source.

The first minister's attack on the Treasury came after a serious of warnings and announcements by major banks Lloyds, the TSB and RBS that they would move their registered offices and some operations to England if there was a yes vote. John Lewis, the retailer, said its prices could rise in an independent Scotland.

The first minister said it was a clear breach of Treasury and civil service rules, which ban any official from releasing market sensitive information. He said the offence was doubly serious since the UK government owns 80% of RBS shares. "It is a basic rule that it can't be released prior to the announcement at 7am this morning. This is a matter of enormous gravity," Salmond said.

He accused the Treasury of being a major force in the no campaign: "They've now been caught red-handed as being part of a campaign of scaremongering." There were now "Treasury fingerprints all over" a campaign of "intimidation and bullying which has served the no campaign so badly".

Speaking at a referendum press conference in Edinburgh, Salmond told the BBC's political editor, Nick Robinson, that the corporation had an obligation to help the investigation.

He said: "I have always respected the journalistic right to protect sources but I know that the BBC will want to support the investigation by the cabinet secretary [Kerslake] in the leak of this market sensitive information. It is as serious a matter as one can possibly get. Therefore I know that the BBC in its impartial role as a public sector broadcaster will give full cooperation" to the inquiry, he said.

The BBC defended its conduct, insisting it was justified in publishing the RBS story: "We note that Alex Salmond has called for an inquiry by the cabinet secretary and we will await a decision on that request. The story in question was accurate and BBC News exercised normal editorial judgments." Severin Carrell/theguardian.com