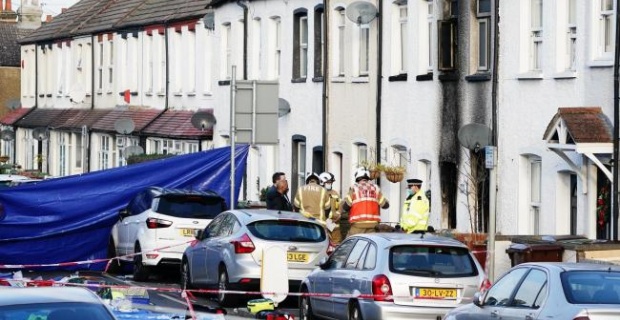 A 27-year-old woman has been arrested on suspicion of child neglect after two pairs of twin boys died in a house fire in south London, the Met police said.

The London fire brigade (LFB) said eight fire engines and about 60 firefighters were sent to Collingwood Road, Sutton, shortly before 7pm on Thursday in response to reports of a fire. Fire crews faced an “intense blaze” throughout the ground floor of the property, it said.

The four boys were taken out of the house and given CPR by firefighters at the scene before being taken to hospital, where they died.

The blaze was under control by 8.36pm and the cause is under investigation.

The London fire brigade deputy commissioner, Richard Mills, said: “I’d like to acknowledge the terrible tragedy that took place last night and our thoughts remain with the family, friends and community of the sad loss of life of four young children.

“Yesterday evening, shortly before 7pm, fire crews attended the scene with eight fire engines and 60 firefighters. We rapidly entered the building with breathing apparatus crews and rescued four children from the building. We immediately carried out CPR resuscitation.

“The children were taken to a local hospital. And, sadly, those four children died later that evening.

The London fire commissioner, Andy Roe, said: “This is an incident that has left everyone numb with profound sadness. My thoughts are with the family and friends of the children, the whole local community and all those who will be affected by this fire.

“Fire crews arrived quickly and located the children inside the property. They were brought out of the house and given immediate emergency care. The welfare of our staff involved in this incident is very important to us and all of them will be offered counselling as a priority.”

The Met police said next of kin were aware of the deaths and would be provided with specialist support.

Roads were closed and emergency services remained at the scene.

Supt Rob Shepherd of the Met police said: “The thoughts of everyone at the South Area command unit are with the family and friends of these four young children, who have suffered such a devastating and tragic loss tonight. I know these sentiments will be shared by the local community, Sutton and London as a whole.

“We remain on scene with our emergency service colleagues and will be working through the night and beyond. At this very early stage the cause of the fire is unknown and will be investigated.”

As we approach the end of the year, we have a small favour to ask. We’d like to thank you for putting your trust in our journalism this year - and invite you to join the million-plus people in 180 countries who have recently taken the step to support us financially, keeping us open to all, and fiercely independent.

The new year, like all new years, will hopefully herald a fresh sense of cautious optimism, and there is certainly much for us to focus on in 2022 - a volley of elections, myriad economic challenges, the next round in the struggle against the pandemic and a World Cup.

With no shareholders or billionaire owner, we can set our own agenda and provide trustworthy journalism that’s free from commercial and political influence, offering a counterweight to the spread of misinformation. When it’s never mattered more, we can investigate and challenge without fear or favour.

Unlike many other media organisations, Guardian journalism is available for everyone to read, regardless of what they can afford to pay. We do this because we believe in information equality. Greater numbers of people can keep track of global events, understand their impact on people and communities, and become inspired to take meaningful action.

If there were ever a time to join us, it is now. Every contribution, however big or small, powers our journalism and sustains our future.

Keywords:
Woman ArrestedSutton
Your comment has been forwarded to the administrator for approval.×
Warning! Will constitute a criminal offense, illegal, threatening, offensive, insulting and swearing, derogatory, defamatory, vulgar, pornographic, indecent, personality rights, damaging or similar nature in the nature of all kinds of financial content, legal, criminal and administrative responsibility for the content of the sender member / members are belong.
Related News