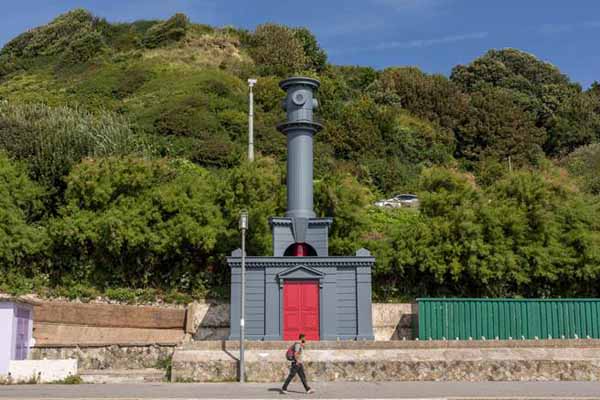 UP Projects is delighted to unveil their latest commission, Beach Hut in the Style of Nicholas Hawksmoor by Pablo Bronstein, for the Folkestone Triennial 2014. Standing ten meters tall, Beach Hut in the Style of Nicholas Hawksmoor appears like a church steeple surrounded by a village of brightly coloured beach huts along the Folkestone beachfront. The artist has imagined what a lighthouse might look like; were it to have been designed by Nicholas Hawksmoor, the early 18th Century Baroque architect. This ‘monument to architecture’ as Bronstein describes it, lays spurious claim to being the first lighthouse, re-imagining the history of the lighthouse from one hundred years earlier. There is a clear difference between the architectural references used and its presence as a beach hut in Folkestone. Bronstein encourages a sense of folly, the ridiculous and fantastic, referencing the nature of exotic pleasure architecture such as the

Brighton Pavilion in other costal towns. Beach Hut represents Bronstein’s first major UK public sculpture commission and can be seen as a development of his Teatro Alessandro Scarlatti, 2011, for the Migros Museum Für Gegenwartskunst’s sculpture project The Garden of Forking Paths in Zurich, where he built the world’s smallest opera house. Pablo Bronstein is one of the most exciting artists of his generation, combining interests in art and architecture with performance, installation, drawing and sculpture. His work often makes connections between classical architecture and contemporary urbanism. He combines references to the history of architecture, from the Roman antiquity and the Baroque to Neo-classicism and Postmodernism.

UP Projects specialise in commissioning temporary and permanent structures, pavilions and sculptures for the public realm and were invited to curate and produce a new artwork for the beach front promenade by The Creative Foundation; the arts charity behind Folkestone Triennial. UP Projects were inspired by the initial brief to commission an artwork that would take the quintessentially English beach hut as its starting point, having previously curated a series of artistdesigned garden sheds for the V&A in 2005 and an ongoing series of temporary pavilion structures across London, named “Portavilion”. The brief presented an opportunity to play with the aspirational and desirable appeal of the English beach hut as well as notions of individual customization and architectural folly.

“We have been looking for an opportunity to commission Pablo Bronstein to create a public artwork for some time and felt that this was the ideal brief to enable him to expand upon previous architectural projects to create an iconic work for Folkestone’s seafront. We are thrilled to be able to contribute such an ambitious project to the Triennial.”

“I proposed to UP Projects that they extend their programme to commission an artist's beach hut for the Triennial, as both within the scope of their programme and of particular interest for the town's future. Pablo Bronstein's playful and beautifully considered response is everything I could have wished for.”

Bronstein’s Beach Hut has been fabricated in steel frame construction and clad in marine ply by local fabricator Holborough Interiors of Folkestone. Pablo Bronstein’s sculpture is an UP Projects production for Folkestone Triennial 2014 realised with a grant from the Creative Foundation. Folkestone Triennial 2014 opens on 30 August and runs until 2 November 2014, featuring 21 newly commissioned artworks including those by Andy Goldsworthy, Alex Hartley, Krijn de Koning, Yoko Ono, Tim Etchells, Muf architecture and Sarah Staton.