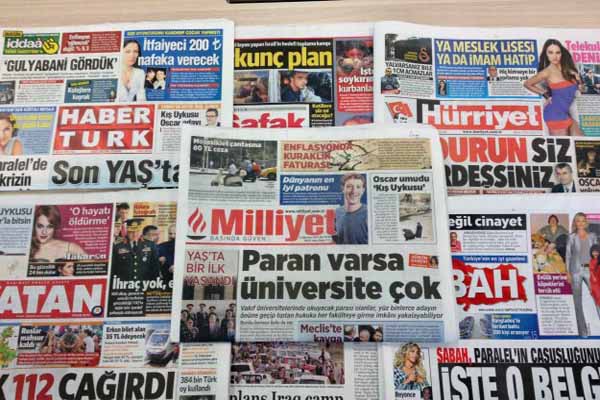 Anadolu Agency does not verify these stories and does not vouch for their accuracy. Almost all Turkish dailies cover on Tuesday outgoing President Abdullah Gul's farewell messages to the public.  Gul delivered a formal online message to the public on Monday and sent goodbye letters to his over hundred counterparts thanking them for good relations with himself and Turkey overall.  HABER TURK quotes Gul saying; "I preserved my objectivity despite my political beliefs... I cared about EU relations and the freedom of press as well as social media..." AKSAM has reports that it is only 48 hours to the end of Gul's term.  Pointing to the claims of "parallel structure" in the Turkish state, the paper cites Gul; "I always stressed that it was out of the question to accept any entity which exists apart from the law and the constitution within the state."  In other news, most dailies continue to cover the deaths of five people who drowned -- with another still missing -- in a river in the province of Siirt in southeastern Turkey on Sunday.

They were swept away when a routine dam gate opening caused the water level in the area of a river they were swimming in to suddenly increase. The remaining eight people swimming in the river, which the dam operating company, Limak Holding, says was a "closed area," managed to make it to safety.

HURRIYET quotes witnesses in its headline; "We collected humans out of the water" saying that they were swimming and picnicking when the tragedy occurred.

"The citizens affected by the incident were in the no-enter zone," a statement came from the Limak Holding Company. However, there are also claims that people around and in the river were not warned about the gates' opening.

According to the Siirt governor, the people around may not have heard the sirens before the gates were opened, STAR reports.

Turkish dailies also cover Fenerbahce's victory over archrivals Galatasaray by 3-2 in the 2014 Turkish Super Cup final on penalties in a lackluster display on Monday night in the western Turkish province of Manisa.

"Super Fener" headlines MILLIYET and says profit from ticket sales for the match will go to the families of the 301 miners who died in the Soma mine tragedy in May.

The profit for the victims is around two million Turkish lira, VATAN says.