Turkish MPs attend the ceremony for coup martyrs, in the UK

The Union of European Turkish Democrats organized a commemoration on Sunday in London for those who lost their lives in the attempted coup on July 15 in which 241 people were martyred and around 2,200 others injured 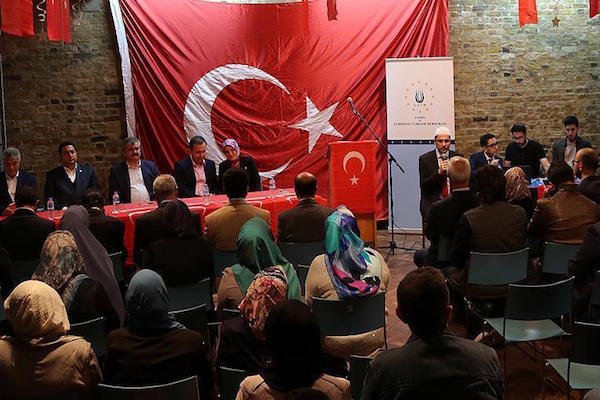 LONDON-The Union of European Turkish Democrats organized a commemoration on Sunday in London for those who lost their lives in the attempted coup on July 15 in which 241 people were martyred and around 2,200 others injured.

The event started with a minute’s silence for those who lost their lives defending their country, followed by the Turkish national anthem.

Speaking to Anadolu Agency, Koseglu said before coming to the U.K., the Turkish lawmakers had been in Germany to commemorate the July 15 martyrs there. “We want to be with our citizens, both to be aware of the danger and to plan our future together,” she added.

Koseoglu also underlined the importance of these kinds of events to create spirit of unity. She said the Turkish lawmakers would be in the Netherlands on Monday to meet members of Turkish society there also.

Turkey's government has said the defeated coup was organized by followers of Fetullah Gulen, who has lived in self-imposed exile in the U.S. state of Pennsylvania since 1999.

Gulen is accused of leading a long-running campaign to overthrow the state through the infiltration of Turkish institutions, particularly the military, police and judiciary.