Turkish-heritage police officers with Haringey Police were honoured by the Borough Commander last Tuesday at a Commendation Ceremony held at Alexandra Palace in the presence of Catherine West MP and the Mayor of Haringey. 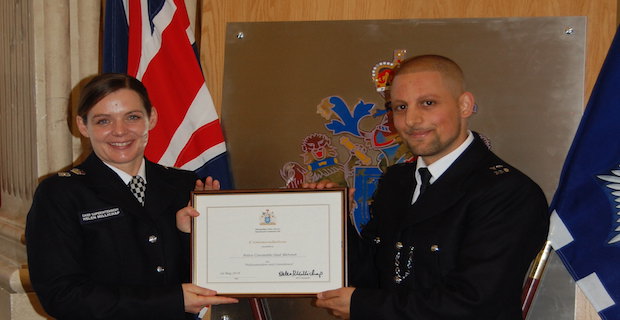 Several Turkish-heritage police officers with Haringey Police were honoured by the Borough Commander last Tuesday at a Commendation Ceremony held at Alexandra Palace in the presence of Catherine West MP and the Mayor of Haringey. Attached are pictures of both of them receiving their awards from Helen Millichap, the borough commander of Haringey Police.

Police Constable Ozal Mehmet (33) was commended, with other members of his team, for Professionalism and Commitment for his actions at an incident in central London before Christmas where rumours of a terrorist attack led to mass panic by the public. PC Mehmet helped to stabilise the area and calm the public whilst making the area safe in case there was an incident unfolding (there was not in the end any terrorist activity). He said he had been glad to be able to reassure the public adding that he was "very proud to be awarded for acting professionally in that situation".

Also honoured was Turkish-Cypriot officer Detective Constable Pembe Rayif (33) who was commended for an Outstanding Example of Investigative Work for her part in a team who secured a conviction and long prison sentence for a highly dangerous individual in Haringey. She commented that this was what she had joined the job to do, further saying "I am honoured to be part of this team".

Borough Commander Helen Millichap noted "It was a privilege for me to be able to recognise these officers, members of the public and police volunteers for their amazing contributions to policing in Haringey. I am so proud of their courage and professionalism. It was also very important for me to thank all the people who help them to be who they are at work, their friends and families."

I hope you can use the story, Vatan, let me know - I'll keep an eye out for it. Let me know if you need anything else.

Keywords:
Turkish Heritage PoliceTurkishpoliceTurkish London PoliceOzal MehmetPembe RayifHaringey Police
Your comment has been forwarded to the administrator for approval.×
Warning! Will constitute a criminal offense, illegal, threatening, offensive, insulting and swearing, derogatory, defamatory, vulgar, pornographic, indecent, personality rights, damaging or similar nature in the nature of all kinds of financial content, legal, criminal and administrative responsibility for the content of the sender member / members are belong.
Related News