Tensions flare up between locals, Syrians in Istanbul 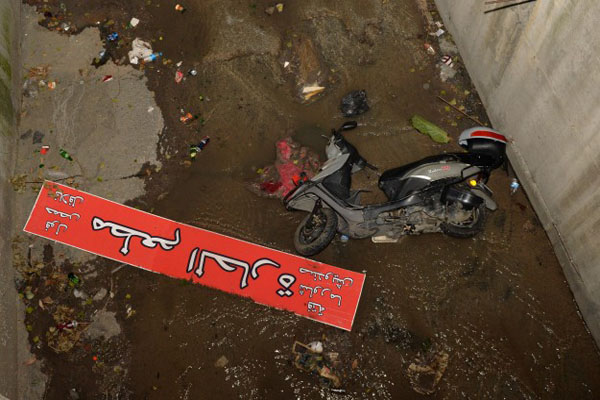 The irate mob smashed the shops' front windows, damaged property inside, overturned a car owned by a Syrian and chucked motorbikes into a narrow valley. As numerous Syrians have fled a brutal civil war that has plagued their country for more than three years and have taken refuge in Turkey, tensions between refugees and the local population have sometimes arisen. As in the neighborhood in Ikitelli district where Sunday’s skirmish took place - the first such incident involving Syrians in Istanbul. The following day brought an appeased atmosphere as well as new light, not only on what had actually transpired the previous night, but also on the complex feelings Turkish residents have toward their new guests. A 36 year-old Turkish coffeehouse keeper, Serkan says that the events of the previous night happened because of a rumor claiming that a Turkish girl had been raped by Syrian teenagers.

"I do not believe there was such an incident,” says Serkan. “There was no rape. Even if it had happened, should we burn down the street where that person lives? There are Turkish people who commit these kinds of crimes. Do we smash their shops or stone their houses?"

A grocery shop owner in the main street of the neighborhood, who wished to remain unnamed, readily agreed.

"The business in the district is better since Syrians came," he says. "And I did not see any of them doing any harm so far even though I stay up late in the shop".

Based on accounts from a friend of the shop owner who was witness to the incident, the unrest started after a “glue-sniffer” attempted to rob some Syrian boys in the street. This apparently turned into a bigger fight between teenage groups.

"If there was not any rape, would people make this up and tell something that did not take place?" disagrees Selami, a 50 year-old worker in the food business.

Selami believes all Syrians should be taken to refugee camps because they only disturb the peace and he does not want another incident.

Clashes between Syrian refugees and locals have sporadically erupted in the country.

In southeastern Turkey, the alleged killing of a landlord by a Syrian refugee sparked skirmishes in the city of Gaziantep, where Turkish residents also took to the streets and damaged shops belonging to Syrians.

Following the rising tension, Turkish authorities, including the concerned ministers and security forces, met last week to discuss solutions regarding health, education, security and job opportunities for the Syrian guests

After the meeting, deputy Prime Minister Besir Atalay called on residents people not to attribute exceptional criminal incidents to the whole Syrian community and pointed out the criminal cases by the Syrian immigrants have remained low in these years.

Still, resentment toward the Syrian community appears for other reasons, real or not.

In Ikitelli, real estate agent, Ahmer Sezer, says the prices have more than doubled because of the influx of Syrian immigrants.

Others believe Syrians replace Turkish workers in certain sectors because they agree to lower wages. Some Turkish media reports have claimed that Syrians sometimes work for nearly half of the minimum wage, which is around 400 liras ($200).

Abdurrahim, a Turkish resident who runs a small textile workshop in the neighborhood, does not give credence to these claims arguing that Syrians are paid the same as Turkish workers. Some Syrians even turn down the offer over expectations to find jobs with higher incomes, he says.

Still, the latest flare-up has made the Syrian community worried.

Aleppo-born Syrian Nidal, a 40-year old father of four who ran the restaurant that was targeted by the angry youths says, "Even if I have this place restored, I cannot be sure the same will not happen again. I have to leave here, but I do not know now where to go."

Moustafa, Nidal’s neighbor here in Istanbul and back in Aleppo as well - where he saw his shoe workshop and three houses bombed by Syrian regime forces - is more tempered in his reaction.

"We have seen a lot of suffering back [home]. A destroyed shop is nothing comparing to what we have been through," he says.

The father of seven now works as an interpreter in a hotel in the Taksim district of Istanbul, a famous tourist center.

Still, despite his relatively good situation in Turkey, he does not want to stay permanently and says he will not hesitate a second to go back to his hometown once peace is restored in Syria.

Turkey is internationally praised for its aid efforts to the ever-increasing number of refugees, hosting around 220,000 of them in camps in provinces near the Syrian border and opening its borders to more than 1.1 million of Syrian immigrants, who settled in various Turkish cities.

According to the Turkey Disaster and Emergency Presidency's (AFAD) head Fuat Oktay, Turkey has spent some $3.5 billion so far in care for the displaced Syrians, while receiving little support, only $230 million from the international community.

Istanbul, with a population of 15 million, hosts the largest Syrian community with 330,000 people, according the Interior Ministry.