People in Scotland are now able to meet friends and family again as the country begins to ease its lockdown after 66 days. 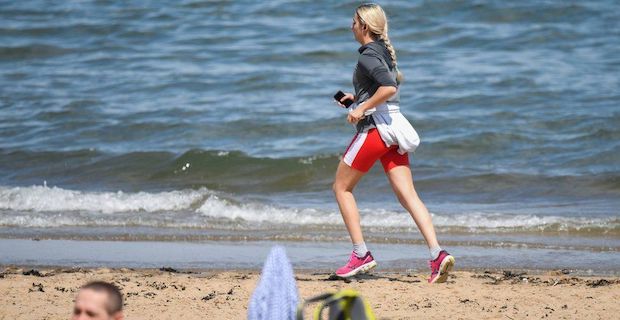 The new rules mean that people from two households can meet outside so long as they keep at least two metres apart. Groups of no more than eight should meet at a time, and you should not go into anyone else's house. First Minister Nicola Sturgeon has stressed that people should still stay at home as much as possible.  Scotland has been in lockdown since 23 March, and did not make major changes to restrictions when they were introduced in England earlier this month.

Ms Sturgeon said there had been a "sustained and unmistakable" downward trend in the spread of the virus over a number of weeks, meaning changes could now be made. But her deputy, John Swinney, warned against people taking things too far, too quickly, as lockdown restrictions are eased.

He told BBC Radio's Good Morning Scotland programme: "We have had an extraordinary level of public compliance so far and we need to see that sustained as we move through each of the phases going forward. "If we have any relaxation of adherence to those essential characteristics of our response, then we run the risk of refuelling coronavirus." The first phase of the Scottish government's four-phase "route map" for restarting society while attempting to suppress the virus is now in place.

It comes as the UK government announced that groups of six people from different households will be able to meet outside in England from Monday. Similar measures have been announced for Wales - although people from two households will be able to meet in groups of any size, so long as they stay local. Meanwhile, outdoor weddings with 10 people present may be allowed in Northern Ireland from 8 June.

Keywords:
ScotlandLockdown
Your comment has been forwarded to the administrator for approval.×
Warning! Will constitute a criminal offense, illegal, threatening, offensive, insulting and swearing, derogatory, defamatory, vulgar, pornographic, indecent, personality rights, damaging or similar nature in the nature of all kinds of financial content, legal, criminal and administrative responsibility for the content of the sender member / members are belong.
Related News