Turkey does not see the EU refugee crisis as a bargaining issue but as an opportunity to help Syrian refugees fleeing war and persecution back home, said Prime Minister Ahmet Davutoglu 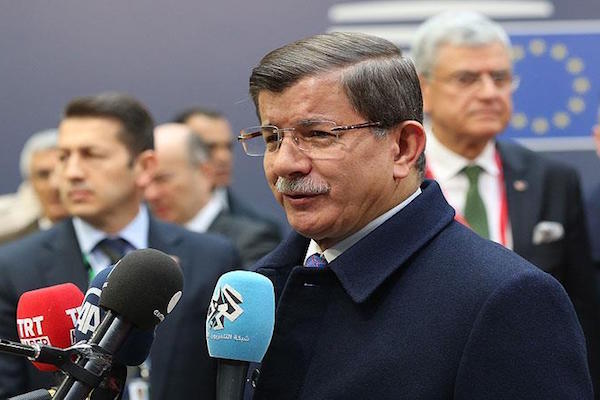 BRUSSELS (AVRUPA TIMES)-Turkey does not see the EU refugee crisis as a bargaining issue but as an opportunity to help Syrian refugees fleeing war and persecution back home, said Prime Minister Ahmet Davutoglu.

Speaking to reporters in Brussels ahead of a meeting with EU leaders to finalize a refugee deal, Davutoglu said: "For us, for Turkey, [the] refugee issue is not an issue of bargaining, but an issue of values …..all humanitarian values, as well as European values."

"Turkey has received 2.7 million refugees, without any significant assistance from anywhere," he added. "And today I also want to re-emphasize that Turkey will continue its policy to have this attitude of humanitarian perspective."

Under Turkey’s proposal to the EU, the country wants the 28-nation bloc to “share the burden” based on a formula of "for every Syrian readmitted by Turkey from the Greek islands, another Syrian will be resettled from Turkey to the EU member states".

"I hope we will be achieving our goal to help all the refugees, as well as to deepen Turkish-EU relations, which is good news for our continent and for all of humanity," Davutoglu said.

Turkey is hosting the largest number of Syrian refugees in the world and has spent more than seven billion euros ($7.7 billion) meeting their needs, according to European Commission figures released last year.

Ankara has also requested visa-free travel for its citizens by the end of June, speeding up its accession talks, and an additional 3 billion euros ($3.3 billion) to meet the needs of Syrian refugees in Turkey.

Over the past year, hundreds of thousands of refugees have crossed the Aegean Sea to reach Greece. This has placed a huge strain on the austerity-hit EU member and threatened the EU’s internal open border system, as countries to the north of Greece impose frontier restrictions.