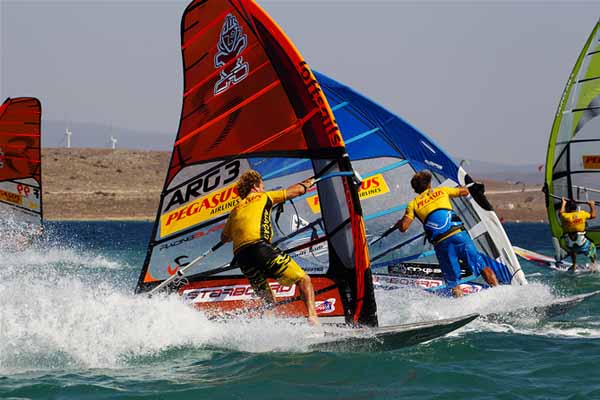 The excitement of the PWA Windsurf World Cup, with the continued support of Pegasus Airlines over the past 8 years, continues in Alacati as the main event at Pegasus Airlines Surf & Sound Festival in Alacati between 26 and 31 August.  The World Cup which paved the way for Alacati to be established as one of the world’s leading windsurf centres fuelling the popularity of the sport, is witnessing the excitement of the world’s fastest windsurfers as they race for ‘the love of the wind’. London, 28 August 2014 – Pegasus Airlines continues to be the main sponsor for the Turkey leg of the world’s most important windsurfing competition - the PWA Windsurfing World Cup for the eighth year running. The races which take place in the Slalom category in 8 destinations across the world will host the world’s fastest windsurfers as part of the cup’s Turkey leg in Alacati, as Pegasus Airlines PWA Windsurfing Cup. Pegasus’ sponsorship highlights the airline’s continuous contribution to the promotion and development of windsurfing and sport tourism. The Pegasus Airlines Surf & Sound Festival, organised by Sportworks on 26-31 August sets its main event as the Pegasus Airlines PWA World Cup, hosting 59 men and 22 women across 35 countries to display their passions, skills and efforts for the win. Professionals and spectators will come together to share the excitement in the Turkey leg of the PWA Windsurfing World Cup in Alacati. Representing the UK in the races will be Ross Williams GBR-83, winner of the 2014 Formula Windsurfing Championships who has been a top representative for British windsurfing for many years.

‘Pegasus’ Special Award for Speed’ launched for the first time last year and adding an extra degree of excitement to the PWA Windsurfing World Cup will once again be up for grabs this year. Athletes will be equipped during their races with GPS armbands to track their speed and results gathered from the GPS devices will determine the fastest male and female windsurfer. The two athletes racing with the highest speed will be awarded the winner of ‘Pegasus’ Special Award for Speed’ alongside a 1000 Euro prize. A total of 55,000 Euros of prize money is estimated will be awarded to the winning male and female athletes during the awards ceremony taking place after the races.

While on holiday, visitors can try their hand at the sport with one of Alacati's many windsurfing schools. Pegasus flies to Izmir, near Alacati, from London Stansted daily offering both direct flights and flights via Istanbul starting from £120.99 one way.  More details of flight schedules and fares can be found on www.flypgs.com/en.