More than 1,000 writers join PEN's call for greater protection for refugees in Europe 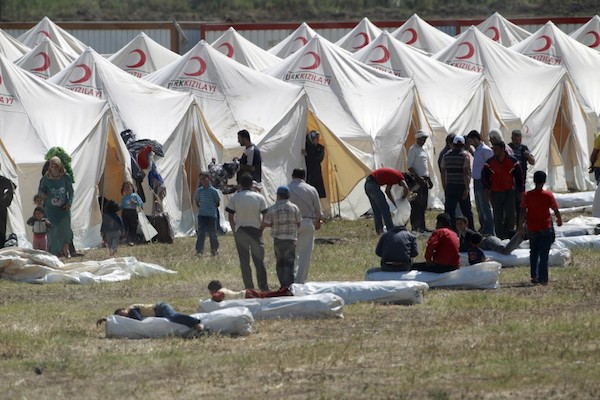 On 14 April, a delegation including English PEN, PEN International and German PEN, will meet the President of the European Parliament, Martin Schulz, in Brussels to deliver the appeal officially, to share concerns about the fate of refugees in Europe and to call for effective action.

This is a powerful message to European leaders at a time of continuing crisis for refugees and an important opportunity for the European Union to play a leading humanitarian role. It’s time for the member states to work together with the EU to find a humane solution.

We go to the European Parliament with a simple message: We and our civilization will be judged by the solidarity we show with people in crisis.

Refugees often accept unbelievable hardships in search of a life worthy of human dignity. We must show ourselves worthy of these people.

Until our continent regards the protection of refugees as a common duty there will be no such thing as a "European community".

The text of the appeal follows below.

Protection for Refugees in Europe

War, political persecution, hunger and inhumane living conditions are forcing people to leave their homelands. Some make their way to Europe. The death of more than 300 refugees in a shipwreck off Lampedusa last October had no impact on refugee policies. Instead, people who need protection on arrival at the borders of the EU are being treated as enemies.

Refugees who make it to Europe often have to face unacceptable harassment. They cannot freely choose where to live. If they do try to make their way to the country of their choice, they risk being locked up, subjected to mistreatment and deported by the police. The Dublin Regulation allows refugees to be treated like human cargo. They may end up in countries where resources are already at breaking point and where asylum seekers, including children, are systematically imprisoned. This policy of harassment, detention and deportation can no longer be tolerated, while the financial burden on poorer countries is unsustainable.

We demand that the nations of Europe create common, humane laws of asylum that are not driven by national interests, but instead by a spirit of solidarity and a sense of responsibility. The obligation to provide protection to persecuted people must apply without reservation.

Europe should come to the aid of people in desperate straits and provide them with routes of escape. People who are in immediate danger should be able to establish direct contact with the embassies of European nations in their country of origin, so that they can apply for humanitarian visas. Refugees should no longer have to risk their lives to come to Europe. If they do seek asylum, they should not be treated like criminals.

Asylum seekers should be given the same basic standards of humane treatment in all EU member states and they must have the same access to a fair asylum process. People should be allowed to live where they have friends or contacts and not be forced to remain in the first European country they enter.

In order to ensure the equal treatment of refugees in all EU countries, the financial costs should be distributed fairly between member states. We propose the creation of a European refugee fund, paid for by member countries according to their means. This fund would ensure that the fate of refugees is independent of regional prejudice or changing attitudes towards immigrants. The European Union must be recognised as a common protective area for refugees.

European border security installations should be recognised as necessary for national security, but should not put the lives of refugees in danger. The deaths of refugees should not be legitimised or tolerated in the name of protecting borders. The protection of human life must have the highest priority.

We writers of Europe request the member states and the institutions of the European Union to meet their humanitarian obligations. We believe it is our urgent joint task to protect refugees and to provide them with prospects for the future.