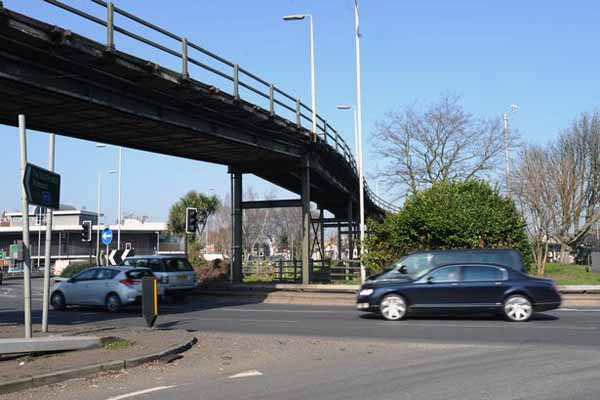 The flyover, which is nearly 50 years old, is used by around 10,500 vehicles a day. The essential maintenance work was required to ensure it remained structurally sound and continued to serve the area for the next 20 to 30 years. Work was carried out during the school summer holidays when traffic levels are significantly lower, helping to reduce the impact on road users. Since 19 July, the single lane eastbound only flyover, which carries traffic from the A316 onto the A4 Great West Road, was closed to traffic to allow engineers to replace the deck, repair the supporting steelwork and install upgraded parapets. Working 24 hours a day, the old deck was demolished and 86 new concrete panels craned onto the structure. The new deck was then secured to the structure, waterproofed and a new road surface, kerbing and parapets installed. New LED lighting on the slip road from the flyover has also been fitted, helping to improve visibility for vehicles entering the A4. Now the highway elements of the works are complete, TfL will begin to upgrade the pedestrian subways near the Hogarth Roundabout, as well as replant trees and flowers around the roundabout to improve the look of the area.

Leon Daniels, Managing Director of Surface Transport at TfL said: “These important works to the Hogarth Flyover, completed over the past six weeks, will ensure that this vital structure remains open for years to come. We’ve carried out this major maintenance project during the school summer holidays with our contractors working 24hrs a day, seven days a week to minimise disruption for Londoners using this important road corridor. During the next ten years, we will be investing around £4 billion into the capital’s roads. The refurbishment of Hogarth Flyover forms part of the continuing work that’s being carried out across London to ensure that road structures remain safe and accessible for the future.”

The refurbishment of Hogarth Flyover forms part of the continuing work that is being carried out across London to ensure that road structures remain safe and accessible for the future:

Since October 2013, TfL has been working to complete the second and final phase of works on the Hammersmith Flyover, which will see the remaining 11 of the flyover's spans strengthened in a similar fashion to the five that were repaired during 2012. Work on the structure is progressing well, and the installation of the first of the new strengthening cables is now underway.

During weekend closures earlier this summer, almost one kilometre of carriageway was waterproofed and resurfaced and new temporary expansion joints were also installed along the structure. Later this year, steel bearings within the structure will also be replaced. These works will be primarily carried out overnight to reduce disruption to road users and local residents.

Work has now started to strengthen and refurbish the 80 year old Grade II listed Chiswick Bridge. As part of these works, the parapets along the edge of the bridge will be strengthened, the steps to and from the riverside repaired, and the lighting across the bridge will be upgraded with new energy efficient heritage lighting, which will replicate the design of the lighting on the bridge when it first opened. A segregated cycle lane will also be installed on the footpath to improve facilities for cyclists.

Works to the structure have progressed well, with more than 80 per cent of concrete repair work to the upper level already completed. TfL has also recently begun installing the new parapets on the central river spans. Later this year, each of the arch spans over the river will be worked upon to carry out minor repairs and in the New Year waterproofing and resurfacing works will take place in the carriageway and pavement areas.

Later this year, TfL will begin works to replace the Power Road Bridge, which carries the A406 North Circular Road (Gunnersbury Avenue) over the railway line. The condition of the bridge, which was built in 1922, has deteriorated and therefore TfL is taking the opportunity to not only replace the bridge, but to built one with a wider carriageway, providing better access for pedestrians and cyclists.

Preliminary works to replace the bridge will begin shortly, with main works taking place between winter 2015 and 2017. During these essential works, disruption will be kept to a minimum.