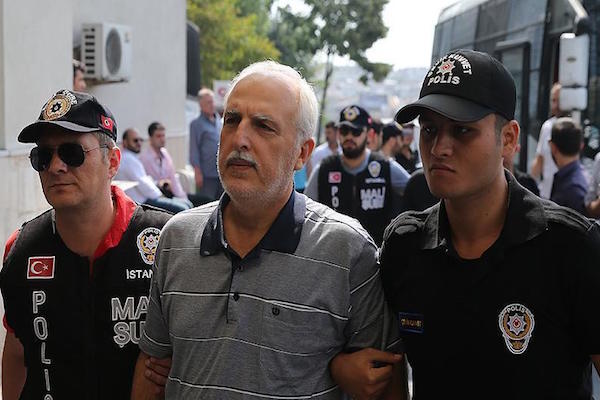 ISTANBUL-Former Istanbul Gov. Huseyin Avni Mutlu was remanded early Friday in connection to a recently defeated coup in Turkey. Mutlu and 11 other suspects, including seven governors, a deputy governor and three district governors, have been remanded for being members of the Fetullah Terror Organization (FETO) the Turkish government accuses of orchestrating the July 15 overthrow attempt.

Mutlu, who served four years as Istanbul governor until 2014 when he was reassigned in capital Ankara to be an Interior Ministry civil servant, denied having ties to the FETO/parallel state structure during interrogation. He was suspended from his position on July 17.

"I reject to be laid off from job two days after the coup attempt which martyred 246 people and injured almost 2,500 others (sic) and pulled a gun on our national will,” Mutlu reportedly told his interrogators. "I refuse to be tried alongside coup-plotters," he added.

He condemned all terror groups, including FETO, and said he did so as events unfolded July 15.

"On the coup attempt night I condemned the coup on Twitter and I obviously said that they should pay the price before law,” he said, referring to the coup plotters. “I have two million followers on Twitter. They all saw my position against the coup", Mutlu said.

Asked about his connection to former Air Force Commander Akin Ozturk, whose telephone number was found on Mutlu’s phone, he said the record existed because of prior professional relationship the pair had while Mutlu was the governor of Diyarbakir province between 2007 and 2010 and Ozturk served as commander of Diyarbakir 2nd Main Air Base.

Ozturk was remanded and dismissed from the Turkish Armed Forces during the investigation against following the coup.

More connections linking Mutlu to Fetullah Gulen, who leads FETO, included two books by the U.S.-based cleric found in the former governor’s home he said could belong to his wife's sister or son.

Mutlu confessed to having once spoken to Gulen but he said he never met him.

"I did not meet Fetullah Gulen who is the FETO armed terrorist organization leader. We had a phone call", he stated.

Turkey has repeatedly said that Gulen is the mastermind behind the failed coup. Ankara has so far sent the U.S. two official requests for his extradition.

Mutlu was detained July 26 as part of the investigation into the coup attempt, which has resulted in at least 239 martyrs and nearly 2,200 others injured, according to Turkish authorities.

Gulen has lived in self-imposed exile in the U.S. since 1999 and is also accused of a long-running campaign to overthrow the state through the infiltration of Turkish institutions, particularly the military, police, and judiciary, forming what is commonly known as the parallel state.

(Reporting by Murat Kaya; Writing by Can Erozden)