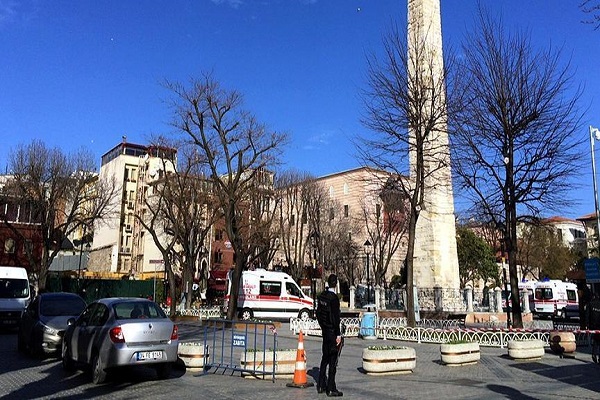 The provincial governor’s office reported 15 wounded in an explosion in the area around Sultanahmet Square at 10.20 a.m. local time (0820GMT). The square lies between two of Istanbul’s most popular tourist attractions, the

Early speculation suggested a suicide bomb had been detonated although there was no official confirmation.

Shop owner Sener Ozdemir, 45, said he heard the blast. “I’ve never heard such a loud explosion in my life,” he told Anadolu Agency. “It was very violent. Just after the incident I saw shocked tourists falling to the ground.”

Police cordoned off the square and closed down the local tram service while nearby attractions also closed.

The area, on the European side of Istanbul, is home to the city’s most popular tourist sites and contains hundreds of hotels and restaurants. The square, which is dotted with gardens, fountains and benches, is usually thronged

with tourists throughout the day.

A year ago a woman killed herself and a police officer when she detonated a suicide bomb in a police station a few dozen meters from Sultanahmet Square.

Elsewhere, there have been terror attacks linked to Daesh. In October, 103 people were killed in a twin suicide bomb attack in capital Ankara while more than 30 were killed in a blast in Suruc, close to the Syrian border, in July.