Twelve patients treated by two British GPs who have been diagnosed with coronavirus are being traced by health officials, the BBC understands. 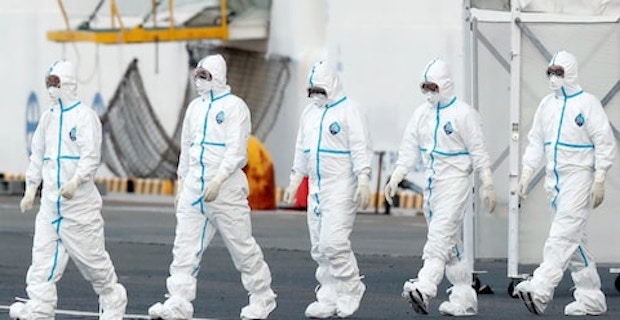 Between them, the two doctors worked in four different places in East and West Sussex - a nursing home, an A&E department and two GP practices. The pair are now in isolation, and efforts to trace those that came into contact with them are ongoing. The GP practices, in Brighton, have now reopened after a deep clean.

Worthing Hospital continues to operate as normal, a Department of Health spokeswoman said.

The nursing home - Patcham Nursing Home - has closed to visitors as a precaution, but nobody there is reported to be unwell.

One of the doctors has been named as Catriona Greenwood who was infected by Steve Walsh - he caught the virus in Singapore before staying with her and a group in a chalet in France.

The second GP has not been named.

Speaking out for the first time on Tuesday, Mr Walsh said he had "fully recovered" from the virus, but remained in quarantine. The total number of people with coronavirus in the UK is eight - six cases in the Brighton area are all linked to Steve Walsh, and there are two in York.  On Tuesday, the World Health Organisation said the official name for the disease caused by the coronavirus is Covid-19. Prof Neil Ferguson, infectious disease expert from Imperial College London, told the BBC that he thought new cases of the virus could still rise.

"I think we're in the early phases of a global pandemic at the moment," Prof Ferguson said. He added it was likely that only one in three cases coming into the UK was being picked up. But John Oxford, emeritus professor of virology at Queen Mary University London, said he thought the virus had a weakness - and people's actions could help slow transmission.

"It's not about wearing a mask - it's less of the hand-shaking, touching and kissing," he said, speaking on the Today programme.

What are the symptoms of coronavirus and what can help stop its spread?

The main signs of infection are fever (high temperature) and a cough as well as shortness of breath and breathing difficulties. Frequent hand washing with soap or gel, avoiding close contact with people who are ill and not touching your eyes, nose and mouth with unwashed hands, can help cut the risk of infection. Catching coughs and sneezes in a tissue, binning it and washing your hands can minimise the risk of spreading disease.

Anyone experiencing symptoms, even if mild, after travelling from mainland China, Thailand, Japan, Republic of Korea, Hong Kong, Taiwan, Singapore, Malaysia or Macau, is advised to stay indoors and call the NHS 111 phone service.

On Monday, the government issued new powers in England to keep people in quarantine to stop the virus spreading.

Under the Department of Health measures, people will not be free to leave quarantine and can be forcibly sent into isolation if they pose a threat.

As of Tuesday evening, a total of 1,358 people have been tested for coronavirus in the UK.

The BBC understands that two prisoners on a wing at HMP Bullingdon in Oxfordshire have been tested for the virus. One of them, a remand prisoner, had recently returned to the UK from Thailand.

The overall number of infections is more than 44,000 on mainland China, with cases in more than 20 countries.

On Wednesday, around 300 employees were evacuated from Singapore's biggest bank, DBS, after one person fell ill with the virus.

Keywords:
CoronavirusGP
Your comment has been forwarded to the administrator for approval.×
Warning! Will constitute a criminal offense, illegal, threatening, offensive, insulting and swearing, derogatory, defamatory, vulgar, pornographic, indecent, personality rights, damaging or similar nature in the nature of all kinds of financial content, legal, criminal and administrative responsibility for the content of the sender member / members are belong.
Related News