Ankara’s expectation of both Germany and other EU countries is that despite differences, they see Turkey as an equal partner, Turkey’s foreign minister said Tuesday. 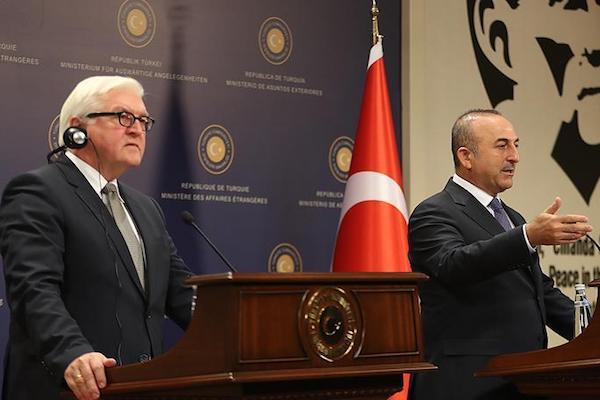 ANKARA-Ankara’s expectation of both Germany and other EU countries is that despite differences, they see Turkey as an equal partner, Turkey’s foreign minister said Tuesday.

“If you want to advance your relations with us in every area, you need to see Turkey as an equal partner, not a second-class country, because we see our partners as such,” Mevlut Cavusoglu told a news conference in Ankara with German Foreign Minister Frank-Walter Steinmeier.

“We do not look at any country from up on high.”

Cavusoglu said talks with Steinmeier had provided a chance to discuss Turkish-EU relations and regional issues, adding that Turkey placed great importance on its ties with Germany.

On the recent strain between Turkey and EU members, Cavusoglu decried EU leaders’ remarks on halting Ankara’s accession talks and said they were triggering a public backlash in Turkey.

“We can overcome this challenging process only through mutual trust-based steps,” he said.

Steinmeier said it was Turkey’s decision to make on maintaining EU membership talks.

Referring to Monday's meeting of EU foreign ministers on Turkey-EU relations, he said: “There are those who argue that it is a better idea to halt membership talks. I defend a different point of view. I think it is a decision to be made in Turkey.”

There has been division among the bloc over Turkey’s membership. France and Germany support negotiations but countries such as Luxembourg and Belgium are more critical of Turkey’s bid and Austria is strongly opposed to continued talks.

Cavusoglu said Ankara expected a more constructive approach from Berlin on joining the EU. “Turkey needs the EU, the EU also needs Turkey,” he told reporters. “However, we have seen that the EU has often forgotten its need for Turkey and denied it.”

The German minister's visit came as ties between Germany and Turkey have been strained, largely due to what Ankara has said is Berlin’s reluctance to take strong action against terrorist groups.

Steinmeier repeated German denials that his country had become a platform for terrorists. He said Germany and Turkey were fighting “hand in hand” against both Daesh and the PKK.

Cavusoglu said:  “Turkey and Germany have worked together against some terrorist organizations, including Daesh, and both are also very strong allies in NATO.”

However, he added: “We have expectations of Germany. First of all, we do not want PKK terrorists to roam freely around Germany.”

In addition to Daesh and the PKK, Turkey is also concerned about activities of the Fetullah Terrorist Organization (FETO), which Ankara has said is responsible for the July 15 coup attempt, and the Revolutionary People’s Liberation Party-Front (DHKP-C) in Germany and across Europe.

The PKK was banned in Germany in 1993 but has more than 14,000 active members in the country and raised more than 13 million euros ($14.3 million) in 2015, according to the annual report of German domestic intelligence agency BfV.

FETO is also active in Germany, which hosts a 3 million strong Turkish community. Several high-ranking FETO members, also known as Gulenists, are believed to have fled from Turkey to Germany.

Steinmeier's visit is his first since the coup bid, which resulted in the deaths of 246 people and wounded around 2,200 others.

He also met Prime Minister Binali Yildirim. According to an official in Yildirim’s office, who asked not to be identified due to restrictions on talking to the media, the prime minister voiced his concern about criticism of Turkey from the EU.

Steinmeier reiterated German support for Turkey’s fight against terrorism and stressed the importance of collaboration between the countries.

He used a meeting with Parliamentary Speaker Ismail Kahraman to condemned the coup bid and repeat support for Turkey’s democratic institutions.