Bridge in Istanbul links Asia and Europe once again

The European and Asian continents have once again been linked on Sunday, this time by Istanbul’s third bridge, Yavuz Sultan Selim, which is scheduled to be operational in August 2016. 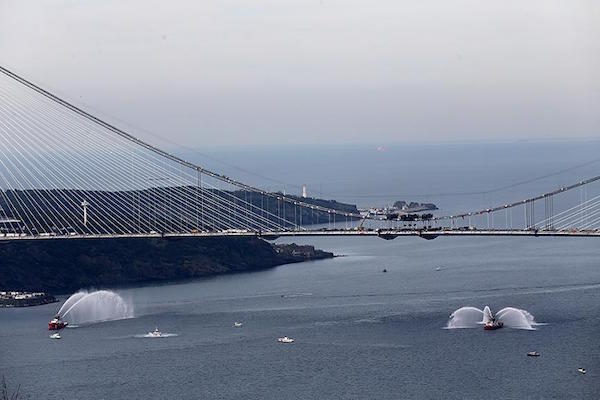 ISTANBUL (AVRUPA TIMES)-The European and Asian continents have once again been linked on Sunday, this time by Istanbul’s third bridge, Yavuz Sultan Selim, which is scheduled to be operational in August 2016.

The final and middle section of the bridge was placed during a ceremony attended by Turkish President Recep Tayyip Erdogan, Prime Minister Ahmet Davutoglu, and Transport Minister Binali Yildirim.

“We will open it all together in August,” Erdogan said.

“When we laid the foundation of the bridge on May 29, 2013, some people were saying, ‘it will not happen’. When they were saying this, we told them: ‘No, we will connect Europe and Asia with Yavuz Sultan Selim Bridge’ and it will be the most important message from us to the world.”

“Only those who think big are able to realize such projects,” the president added.

The Yavuz Sultan Selim Bridge was named after 16th century Ottoman Sultan Selim I, whose rule marked the expansion of the burgeoning world power in the Middle East.

Completed, the bridge, which will have reportedly cost $3 billion, will be 1,408 meters in length and 59 meters in width.

The bridge will boast eight lanes of motorway and two lanes of railway.

"There is no other suspension bridge that has such a length in the world," Erdogan added.