DOLLAR 18,46
EURO 17,85
GOLD 974,14
BIST 3.233,78
The British pound slipped to 1.1187 against the US dollar on Friday, its...
London’s Transport Commissioner Andy Byford set to leave TfL
Tax cuts are likely to push UK borrowing and debt to unsustainable levels
Karaca launches limited-edition collaboration with visionary designer...
South Africans are demanding return of Great Star of Africa
Registration for the New Term Art, Language and Music Short Courses has...
Plan ahead if visiting London for the State Funeral of Her Majesty Queen...
How to get to the back of the queue! Queen Elizabeth II lying in state...
Karaca will be showcasing its Karaca X Chalayan collection at Design London
Armenian forces periodically opened fire on several Azerbaijani army positions

That was slower than the 0.7% rate in the previous quarter, but stronger than analysts' estimates of about 0.3%. 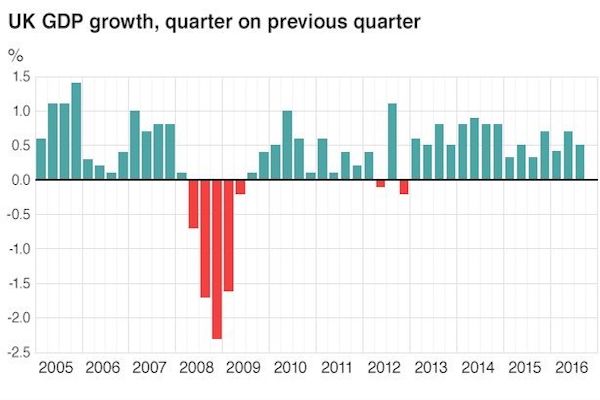 The stronger than expected growth will further dampen expectations that the Bank of England's Monetary Policy Committee will cut interest rates next week. The economy has slowed slightly but by nothing like as much as feared and the Office for National Statistics says that "the pattern of growth continues to be broadly unaffected following the EU referendum". That pattern is however a rather unbalanced one, the only sector of the economy that continued to grow was services up by 0.8%; agriculture, manufacturing production and construction all shrank.

Brexit supporters will take these figures as a sign that warnings about the economic costs of voting to leave the EU were nothing more than scaremongering. Remain supporters will argue that they were warning about potential damage over a period of several years. They say that only prompt action by the Bank of England saved deeper damage to the economy and that worse is to come.

Welcoming the figures, the Chancellor of the Exchequer, Phillip Hammond said: "The fundamentals of the UK economy are strong and today's data show that the economy is resilient."